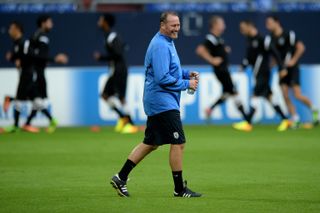 Stevens heads to Gelsenkirchen for the first time since he was sacked by Schalke last December, after an ill-fated 15-month spell with the German club, with PAOK looking for a good start to their UEFA Champions League two-legged qualifying play-off on Wednesday.

It was the 59-year-old's second stint at the Veltins Arena, following a six-year tenure from 1996-2002 where he led the club to the UEFA Cup and two German Cup crowns.

Now in charge of Greek club PAOK, Stevens is happy to be back in Germany but is well aware of the challenge his new side has to progress to the Champions League group stage.

"Well, of course, you're happy when you come back after a short time to play Schalke as an opponent, because I get to see a lot of friends and people I worked with again; people who I worked with successfully," Stevens said on Tuesday.

"But I have to say this very clearly; we really are the outsiders and that we are here, we didn't think it was possible either but we are here and we will give it our best.

"I think that Schalke have also acquired some good replacements for certain positions.

"So therefore if you compare that with PAOK, we can't buy any players for â‚¬8million. We just don't have that possibility. We have a totally different budget."

Stevens remains a popular figure at Schalke and the German side remain wary of the veteran coach.

"Yes, you have said it rightly, Huub was one of the club's greatest managers. I think that the team and also the club and the fans are looking forward to seeing him," Schalke defender Benedikt Howedes said.

PAOK will head into the tie with nothing to lose, originally knocked out of the competition by Metalist Kharkiv in the last round only to be re-instated when the Ukranian club was disqualified over match-fixing allegations.

Schalke coach Jens Keller, who took over from Stevens when he was shown the door in September, has the task of lifting his side following a 4-0 Bundesliga defeat to Wolfsburg on the weekend.

After reaching the last 16 of the tournament last season, Schalke are favourites to progress from this tie but Keller is taking nothing for granted.

"We expect them (PAOK Salonika) to be a really strong team," Keller said.

"We have watched their opening league game in Greece, but we have also watched both of their UEFA Champions League qualifying games (versus Metalist).

"I will show some scenes from their games to the team tonight. It's a very good team. They were not inferior to Metalist."

If Schalke are to progress they will need to do it without star striker Klaas Jan-Huntelaar, who is out for a month with a knee injury.