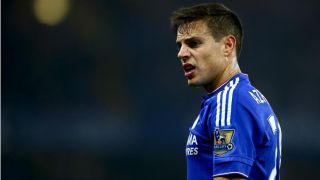 Chelsea defender Cesar Azpilicueta has urged his side bounce back from their Premier League defeat to West Ham with victory over Stoke City in the fourth round of the League Cup.

Jose Mourinho's strugglers travel to the Britannia Stadium on Tuesday in search of a much-needed win, having lost three of their last five games in all competitions.

Stoke, meanwhile, suffered a surprise home defeat to Watford on Saturday, bringing their five-match unbeaten streak to a halt.

Tuesday's clash is the first of two meetings between the sides in the space of 11 days, and Azpilicueta is hopeful the quick turnaround of games will benefit Chelsea as they look to recover some form.

"We want to play again as soon as possible, because we need to win some games and so the match against Stoke comes at a good time," he told Chelsea's official website.

"We have to recover from this defeat [at West Ham] as quickly as possible, and our mentality has to be to win and get through to the next round. Nothing less than that is good enough."

Chelsea comfortably dispatched Walsall 4-1 in the third round, while Stoke are in the fourth round courtesy of victories over Luton Town – on penalties – and Fulham, respectively.

But they were well-beaten by Watford last-time out, and Mark Hughes believes facing a vulnerable Chelsea side provides an ideal opportunity to return to winning ways.

"The performance against Watford was not one I recognised to be perfectly honest," he said.

"But the good thing is that we have a big game on Tuesday against Chelsea, and that is the perfect game for us. We can get back on track."

Hughes may be able to welcome Ryan Shawcross back into the fold for the clash, with the defender ready for a return to action following back surgery, although he did confirm Geoff Cameron would likely be absent after going off injured against Watford.

Chelsea, on the other hand, will definitely be shorn of Nemanja Matic – suspended after picking up a red card during the West Ham defeat – while Branislav Ivanovic (hamstring) and Loic Remy (knock) are both doubtful.