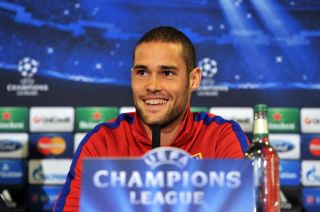 The La Liga leaders head to London on Wednesday with plenty of confidence despite being held to a scoreless draw in the first leg in Madrid last week.

Suarez, who is set to replace suspended captain Gabi in defensive midfield, declared on Tuesday that Atletico cannot wait to take on Chelsea at Stamford Bridge.

"We've earned the right to be here. We feel very motivated.

"No one can beat us in terms of desire and, if we do things well, we feel we have a good chance."

Chelsea manager Jose Mourinho has come in for plenty of criticism over the way his team focused on defence in both their semi-final first leg in Madrid and against Liverpool in the Premier League on Sunday.

Suarez does not expect Mourinho's tactics to change too much at home.

"We expect them to be similar; they won't go crazy, although they'll probably be out to attack a bit more because they need a goal," the Spaniard said.

"But we know they'll look for their opponent to make mistakes. We need to do things well, try to take our chances."

Suarez is expected to line up alongside Tiago as one of the two holding players in front of Atleti's defence with Gabi unavailable after the skipper received a yellow card in last week's first leg.

Gabi told Marca he is 'devastated' to miss out on the match but has complete confidence his teammates will take Atletico to the Champions League final.

"I'm devastated at not playing. Whoever plays will do a good job. We will try and urge them on, holding up our scarves, and I'm sure that the team will live up to the occasion," the 30-year-old said.

"The team deserves all of the support they are getting from the fans. We are in the clouds and we don't want to come down.

"I am absolutely certain we'll go through."

Atleti last qualified for the final of the European Cup/Champions League in 1974 when they lost to Bayern Munich.

This time around, local rivals Real Madrid await the men in red and white stripes if they can overcome Chelsea, after Carlo Ancelotti's men defeated Bayern 5-0 on aggregate on Tuesday.