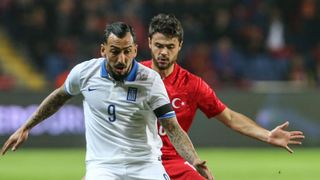 Turkey coach Fatih Terim has criticised fans who whistled throughout the minute's silence ahead of his side's friendly with Greece.

The mark of respect for the victims of the Paris atrocities on Friday in which 129 people were killed was disrupted by whistles and then chanting at the Istanbul Basaksehir stadium.

Terim told TV8 after the game: "We shouldn't portray ourselves like this. When our fans act like that, we will have a hard time explaining ourselves to the rest of the world.

"Why can't we show just a minute of respect?"

Terim was also unhappy at the booing of the Greek national anthem - the match was attended by Turkish Prime Minister Ahmet Davutoglu and Greek counterpart Alexis Tsipras in a show of reconciliation after previous hostilities between the countries.

"Booing the anthem, where's that coming from?" he added. "We are better than this. If this would have been done to us, we would be really upset. If we don't act like we did today, we can prevent sports from being sacrificed to terrorism."