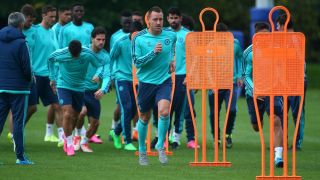 Chelsea manager Guus Hiddink has been giving John Terry a form of "work experience" during his time on the sidelines with injury.

Terry has been out of action with an Achilles problem since the 2-2 draw with West Ham on March 19, which was only his second appearance after returning from a previous one-month spell out with a hamstring issue.

The Chelsea captain's contract expires at the end of the season, with his future at the club still shrouded in doubt.

Hiddink denied Terry has been shadowing him during training to get a closer view on the management side of the game, instead likening the situation to work experience with the 35-year-old still seen as a player.

The Stamford Bridge boss said: "I don't allow anyone in my shadow - of course I'm kidding! That's a long way to go - but it's always good when players, in my previous experience, get interested in football and not just playing.

"It's good for them to have the view from the management side. That is nice. All the players are getting interested; it's good to have them close. But first of all he's considered as a player - kind of like work experience."

Terry will travel with the squad for this weekend's Premier League meeting with AFC Bournemouth but will not feature, though Hiddink expects Eden Hazard to play a role following a hip injury.

"Loic Remy is out and Terry is not still available to play," revealed the Dutchman. "He will travel with the team this afternoon to Bournemouth but he is not yet able to step in.

"He is travelling because I like people to be involved. He is very committed, annoyed about his injury but now recovering. I like to have him and he desperately wants to be with the team.

"Hazard is available again and he will travel. If not for the whole game, I think, he is available to play. This week he was training physically without any complaints, which is also good."