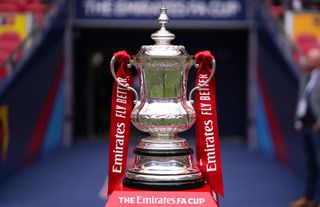 The FA Cup first round proper always throws up a number of shocks and there are plenty of potential banana skins in this year’s competition.

Here, the PA news agency highlights three ties to keep an eye on.

✍️ SQUAD UPDATE | The Club are delighted to announce the permanent signing of Reeco Hackett-Fairchild!— Bromley FC (@bromleyfc) May 30, 2019

Canny moves in this summer’s transfer market have turned Neil Smith’s Bromley from a mid-table National League side into table-toppers. Bringing in the likes of Billy Bingham, Reeco Hackett-Fairchild on a permanent deal from Charlton and fellow forward Michael Cheek have given the Ravens enviable attacking options in the fifth tier, and Bristol Rovers must be on their guard. Graham Coughlan’s League One side have struggled in the absence of leading scorer Jonson Clarke-Harris, who has missed the last five matches with an injury sustained in training, but they returned to winning ways at Rochdale last weekend. Expect goals and a potential shock in this one.

Fixtures have not been kind to Sol Campbell since he took charge at League One strugglers Southend. The former England international defender started life at Roots Hall with a home clash against leaders Ipswich, then came a trip to last season’s beaten play-off finalists Sunderland and most recently he faced another of the division’s big guns in Portsmouth. All three ended in defeat, with eight goals conceded and only two scored. What better way to follow that than with a tricky FA Cup tie away at a team two levels below the Shrimpers. Dover are currently 12th in the National League but are just four points off the play-off places. Inih Effiong will be one to watch for Campbell, the striker scoring nine league goals so far this season.

Harrogate’s 4-2 defeat at Eastleigh last time out was their first loss in 11 matches in all competitions. Simon Weaver’s side did not make the best of starts this season, having finished in the National League play-off places last term, but have turned their campaign around over the last few weeks and sit seventh in the table. Portsmouth were one of League One’s promotion favourites following an impressive fourth-place finish in 2018-19, but they have struggled so far. Boss Kenny Jackett was under pressure before a 4-1 win against Southend bought him some time. Pompey will not have it all their own way in this one. Throw in a 3G pitch and it could be very interesting.