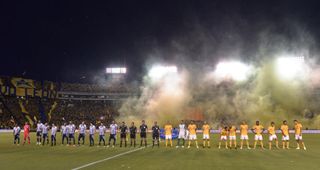 A Mexican football supporter is in intensive care after undergoing surgery following a clash between fans of Tigres UANL and Monterrey on Sunday.

The match between the Monterrey-based rivals, known as the Clasico Regio, ended in a 0-0 draw but was overshadowed by fighting on Avenida Aztlan.

The hospitalisation of one supporter was confirmed by the Nuevo Leon attorney general's office and both clubs released statements in response to the violence.

A statement from Tigres said: "Although the 117th Clasico at the Estadio Universitario did not report any incident, Tigres regrets what happened on Avenida Aztlan where, before the start of the game, a fan was seriously injured in a fight.

"Taking the rivalry from football to the streets is regrettable and unacceptable.

"We urge the community to contribute, by any means, information that will lead the authorities to find out what caused the acts of violence."

Monterrey's statement echoed those sentiments, saying: "Monterrey deeply regret and condemn the acts of violence that happened this Sunday, before and around the 117th Clasico Regio.

"Our club strongly disapproves of those who provoke or engage in this type of violent behaviour that causes irreparable damage to families and stains the sport."