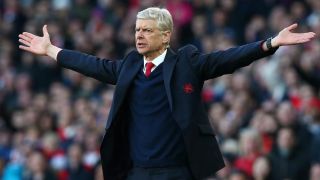 Arsene Wenger is adamant a top-four finish would not be enough for Arsenal in 2016-17.

The Gunners have consistently finished in the Champions League places under Wenger, but have not won the Premier League title since 2003-04.

Wenger's men had to settle for second place behind Leicester City last term and the Frenchman is desperate to do one better in the new season.

"A top-four finish is never enough," Wenger, who is in the final year of his current contract, told the official Arsenal website.

"I personally believe that no matter what you do, it's never enough. You have to give absolutely everything to take the best out of the team.

"I believe that we know what we have to do, because we were second last year and we had 18 teams behind us."

"It's a big ask, because when you look at the Premier League, every club is hugely ambitious," he added.

"You look at the cheques that everybody signs and it's quite scary.

"That's what the Premier League is about at the moment."