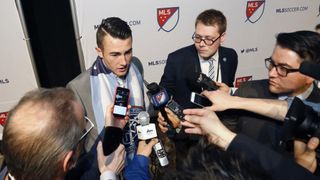 "I want to thank Chicago Fire for having faith in me," the No. 1 overall selection said. "Hopefully I can serve you guys well."

Little did he know those wouldn't just be his first public remarks as a member of the Fire — they'd also be his last.

Once Harrison stepped backstage, confusion sunk in. He and his mother were ushered aside. As subsequent selections made the rounds with reporters, the top pick was told to stay put.

MLS commissioner Don Garber then announced that Fire had executed a trade, sending the No. 4 selection and allocation money to New York City FC for a player to be named later.

About 30 minutes later, in fact. Eventually, the deal was announced: NYCFC had traded for Harrison, resulting in the Wake Forest product getting sent to the same club that unsuccessfully attempted to acquire his rights as a homegrown player earlier this offseason.

"It was all very exciting," Harrison told Goal USA. "It's nice to be wanted. It's very humbling that New York would go out of their way to get me. I'm just happy to see what the next step holds."

NYCFC reached out to Chicago two days ago about trading up for Harrison. As the draft grew closer, sporting director Claudio Reyna thought the clubs had reached an impasse. But as Garber prepared to deliver his opening marks at the draft Thursday, the wheels started turning. The Colorado Rapids and Philadelphia Union facilitated a separate trade involving the second selection, and that deal factored into negotiations for the top pick.

As Garber took the stage, NYCFC and Chicago came to an agreement.

"I would say 10 minutes before the first pick we felt we had no chance of getting him," Reyna said. "It was pretty crazy for us because we were already thinking about Plan B."

The trade was the culmination of a long-winded courting between NYCFC and Harrison. Reyna and Co. initially attempted to sign the England native as a homegrown player because he spent three years playing for the Manhattan Soccer Club, an NYCFC youth affiliate.

MLS ultimately rejected the flimsy claim — and Harrison moved on.

"It would have been nice. Who wouldn't want to be coached by Patrick Vieira?" Harrison said. "But I was also happy going to Chicago. I just wanted a place where they could give me a good opportunity and I could make the most of it."

Now Harrison is an NYCFC player after all, adding another weapon to what was the league's fifth-best attack in 2015. After notching eight goals and 11 assists for Wake Forest en route to ACC Offensive Player of the Year honors this past fall, the 19-year-old playmaker figures to contribute to his new club from a creative wide role.

Being deployed on the flank should allow Harrison to dodge the glut of competition in central midfield — where he would compete with the likes of Andrea Pirlo, Frank Lampard, Mix Diskerud and Kwadwo Poku — and add another dimension to Vieira's attack.

"He's both a short-term and a long-term player for the club," Reyna said. "He can help us this year. He needs to settle in and take a deep breath after this crazy few weeks for him, but he has exactly what we need. He adds attacking qualities to the team — he has 1v1 ability, he can create chances, he can score and he's got a great attitude.

"Above everything, he's a great kid who wants to get better. He's hungry, and around the guys on our team there's no doubt he's going to continue to improve."

A Manchester United youth product, Harrison acknowledged being "really apprehensive" when his mother first suggested that he consider hopping across the pond in search of opportunity and education. A visit stateside changed his mind, and at 14 years old he took the plunge.

Five years later, he couldn't be happier that he did.

"It's an amazing experience to be out here," Harrison said. "A lot of players in England, they kind of underestimate American soccer. The college game is growing fast. There has been a lot of great players, and the league is growing too. It's very exciting for soccer in America — and I'm very excited to be a part of it."