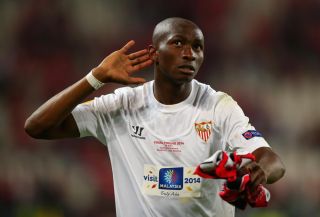 Unai Emery's men lifted the trophy back in May following a penalty-shootout victory over Benfica in Turin and, after back-to-back crowns in 2006 and 2007, are out to repeat that feat come this season's showpiece in Warsaw.

Their quest got off to an solid start as they began their Group G campaign with a comfortable success against two-time champions Feyenoord.

Both goals arrived in the first half, through Grzegorz Krychowiak and Stephane M'Bia, as Emery's side laid down a marker.

In the other match in the champions' group, Standard Liege matched the result of their Spanish rivals as late goals from Laurent Ciman and Vinicius Araujo earned them success over Rejika.

Participating in European competition for the first time since the 2009-10 season, Everton made a flying start to their campaign by hammering Wolfsburg 4-1 at Goodison Park.

The visitors' Ricardo Rodriguez put through his own net in the 15th minute, before Seamus Coleman doubled the lead on the stroke of half-time.

Further strikes from Leighton Baines and Kevin Mirallas arrived in the second half, before Rodriguez found the net at the right end at for a late consolation.

Three-time winners Inter got their campaign off to a solid start as Danilo D'Ambrosio's 71st-minute goal earned them a 1-0 win at Dnipro, who had Ruslan Rotan sent off four minutes previous.

Inter have stolen an early march on the rest of the group after Qarabag's 0-0 draw with Saint-Etienne.

There was another goalless draw in Belgrade as Partizan and Tottenham played out a stalemate, while Besiktas' 1-1 draw with Asteras Tripolis ensures Group C remains all square.

Dinamo Zagreb were comfortable 5-1 winners at home to Romanian outfit Astra, thanks in no small part to a hat-trick from El Arbi Hillal Soudani.

​PAOK went one better, dismissing Dinamo Minsk 6-1 at home with a 17-minute treble from Stefanos Athanasiadis, while in the other match in Group K, Fiorentina swept aside Guingamp 3-0 in Italy. The losing sides in both matches finished with 10 men.

If Athanasiadis' goalscoring exploits were spectacular, he was outdone by Steaua Bucharest's Claudiu Kesuru, who scored three times in 11 second-half minutes as the Romanians hammered 10-man AaB 6-0.

Young Boys were similarly convincing winners, 5-0 at home to Slovan Bratislava, while their Group I rivals Napoli were also victorious, coming from behind to beat Sparta Prague 3-1 thanks to Gonzalo Higuain's penalty and a second-half brace from Dries Mertens.

PSV, who won the tournament in 1978, clinched a 1-0 home success over Estoril thanks to Luuk de Jong's 26th-minute penalty, while Dinamo Moscow were indebted to goals either side of half-time from Aleksandr Kokorin and Alexei Ionov for their impressive 2-1 triumph at Panathinaikos.

The clash between Club Brugge and Torino ended 0-0, while Apollon's 3-2 win over Zurich was much more eventful. Philippe Koch's 87th-minute own goal handed the Cypriot outfit the points, while both sides saw a man sent off in the final 10 minutes.

There was further entertainment in Austria as Salzburg twice came from behind to draw 2-2 with Celtic, while Copenhagen overcame HJK 2-0, and Borussia Monchengladbach drew 1-1 at home to Villarreal.