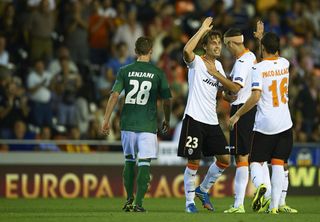 Vertonghen headed in a Christian Eriksen cross in the 12th minute before the Moldovan outfit saw Henrique Luvannor's effort cleared off the line and an Ismail Isa goal ruled out for offside.

Sheriff controlled large stages of the match, but after Aaron Lennon was denied by the post, Defoe sealed the visitors' win with his sixth goal of the campaign 15 minutes from time.

Italian outfit Fiorentina cruised to a 3-0 victory over Pandurii Targu Jiu of Romania, with Joaquin and Ryder Matos scoring in the first half for the hosts.

Fiorentina, who beat Serie A champions Juventus 4-2 on Sunday, sealed the Group E triumph with a strike from substitute Juan Cuadrado in the 69th minute.

Bundesliga side Frankfurt were also easy winners, as goals from Vaclav Kadlec and Alexander Meier gave them a 2-0 Group F win over a 10-man Maccabi Tel Aviv outfit.

Sevilla lost their 100 per cent record and were forced to come from behind to snare a 1-1 draw at Slovan Liberec in Group H.

Vitolo's 88th-minute effort cancelled out Michael Rabusic's early goal in the Czech Republic, as the hosts – who finished with 10 men after goalkeeper Premysl Kovar was sent off – were denied all three points.

Valencia romped to a 5-1 success against St Gallen of Switzerland in Group A, with Argentinian Federico Cartabia scoring twice in the first half for the home side.

Paco Alcacer and Ricardo Costa also scored before the break and Canales made it five with 19 minutes to play.

And although St Gallen pulled back a consolation through Stephane Nater, it mattered little in Spain.

The other match in Group A saw Kuban Krasnodar steal a point in a 1-1 draw at Swansea City thanks to Djibril Cisse's injury-time penalty, which cancelled out Michu's fourth goal in the competition.

Clement Grenier's 67th-minute goal gave Lyon a 1-0 win over Rijeka in Group H, while PSV were held to a goalless draw at Dinamo Zagreb in Group B and Lazio suffered the same fate at Apollon in Group J.

Other results saw Salzburg and Esbjerg triumph 2-1 over Elfsborg and Standard Liege respectively in Group C, while Maribor beat Zulte-Waregem 3-1 and Wigan Athletic drew 1-1 with Rubin Kazan in Group D.

Dnipro Dnipropetrovsk were 2-0 winners at Pacos de Ferreira in Group E, while Ludogorets also won on the road, defeating Chornomorets 1-0 in Group B.

Bordeaux claimed a last-gasp 2-1 win over APOEL in Group F, while Freiburg played out a 1-1 draw with Estoril in Group H, as did Genk and Rapid Vienna in Group G.