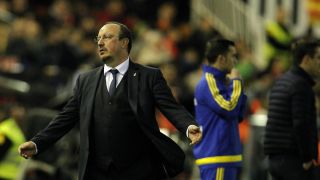 Benitez, making his return to a club he guided to two La Liga titles, will likely face further difficult questions over his future after another indifferent display that saw Alcacer grab the headlines moments after Gareth Bale looked to have headed in the winner.

Karim Benzema had opened the scoring with a well-worked early goal to silence the home crowd, but Gary Neville's men were rewarded for their endeavour when captain Dani Parejo levelled from the spot before half-time.

Like in their 3-1 win over Real Sociedad on Wednesday, Benitez's men lacked fluency in the final third, with Neville's former Manchester United team-mate Cristiano Ronaldo failing to inspire his side to a victory that would have moved back to within two points of the summit.

Mateo Kovacic – in for James Rodriguez following the Colombian's reported speeding incident in midweek – was sent off 21 minutes from time for a poor challenge, although Bale looked to have given his manager breathing space when he nodded in Toni Kroos' delivery eight minutes from time.

However, when Alcacer headed home unmarked a minute later, Neville – still to mastermind a league win – was ensured a deserved point, while Benitez was left to rue another sloppy display.

Benitez received a warm welcome at his old club and saw Bale's deflected cross give Jaume Domenech a scare before the Welshman played a key role in Madrid's opener 16 minutes in.

Bale's back-heel found Ronaldo, who nonchalantly laid the ball off for Benzema to sweep home as Madrid's much-vaunted BBC clicked into gear early on.

The opening half hour continued in frenetic fashion before Joao Cancelo spurned the first of two glorious Valencia chances when he got between Sergio Ramos and Pepe only to head Rodrigo de Paul's cross wide.

Andre Gomes then collected De Paul's intricate pass before blazing his effort wide and Aymen Abdennour hooked a shot past the post following a goalmouth scramble.

Valencia piled on pressure before the break and got their reward when Gomes surged into the area where he was felled by Pepe, with former Madrid man Parejo calmly placing the ball past Keylor Navas.

Madrid began the second half brightly, Marcelo denied with a superb last-ditch tackle from Lucas Orban, in what remained a fast-paced encounter.

As Valencia stayed resolute at the back, Ronaldo saw penalty appeals waved away when he appeared to be felled by Domenech before Kovacic received his marching orders for a lunge on Cancelo.

Madrid threw men forward in search of a winner and looked to have claimed victory when Bale rose to expertly guide in Kroos' cross, only for Alcacer to have the final say.

The Spaniard's eighth league goal of the season earned Neville's men a point to leave Madrid winless in four against Valencia, who could have claimed their coach's first top-flight win when substitute Alvaro Negredo was thwarted by Navas in stoppage time.

- Real Madrid have conceded seven headed goals, more than any other team in La Liga this season.

- Gareth Bale has scored more headed goals than any other player in La Liga this season (4).

- Toni Kroos completed more passes with 100 per cent occuracy than any other player in a La Liga game this season (80 out of 80).

- Valencia have gone 21 league home games without a loss, their best undefeated run at home since October 1990 (22).