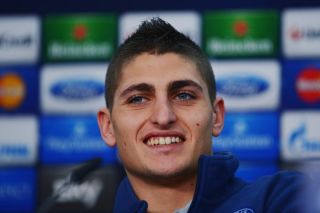 The Italy international is currently in his second year in the French capital after moving from Serie B outfit Pescara, and his performances during PSG's charge towards a second straight Ligue 1 title have sparked speculation above a possible move abroad.

European giants Juventus and Real have been talked about as potential destinations for the 21-year-old, but Verratti wants to remain in Paris, as long as the club are willing to keep him.

"Clearly I am pleased to be of interest to a club like Juve, but I repeat I am very happy in Paris," he told Sky Sport Italia.

"I am very happy at Paris Saint-Germain. Every year rumours seem to emerge that I am going to Juventus, so this story has been going for a long time.

"I speak to (current Real and former PSG boss Carlo) Ancelotti often and we have an excellent rapport.

"I grew up a lot under his tutelage and I'd love to work with him again.

"As I said though, I am happy at PSG and would only look around if I was told I no longer had a place in the project."