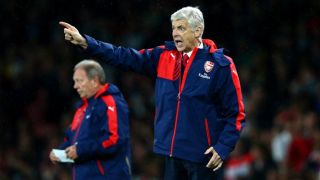 Arsene Wenger wants Arsenal to shake off the effects of the international break as quickly as possible as they prepare to face Watford in the Premier League on Saturday.

An impressive 3-0 win over Manchester United moved the Gunners to within just two points of league leaders Manchester City before the latest round of friendlies and qualifying games for Euro 2016 and the 2018 World Cup.

Wenger claimed this week Arsenal will sustain a title challenge this season should they keep up the same "fight" they displayed against Louis van Gaal's side, and the 65-year-old feels his side must recapture the "urgency" of that performance against Watford.

"We separated on a positive vibe," he said. "After that, the task is to reconnect quickly because everybody goes to their national teams and has different worries.

"We play against Watford, who have conceded only one goal at home and defend very well. They are a very difficult team to play against so we have to focus to get a positive result on Saturday.

"The level of champions and people who want to fight at the top is urgency. Urgency is something that keeps you alert and we know what will be expected of us."

Arsenal take on a Watford side with just one win in their last five matches in all competitions, but defender Allan Nyom sees no reason not to push for maximum points.

"It's going to be a good game. We will try to play well and win the game, even though they are a big team," he told Watford's official site.

"In the Premier League, every game is hard. It's normal that if you play against a top team it's a little bit more hard, but we will try to play good and win the match.

"We want to play well, keep the ball and score goals. This way our fans will enjoy the game. They support us very well and they help us to run, to fight, and to play better."

Wenger has some concerns over the fitness of Alexis Sanchez, with the Chile star - who has scored five goals in his last two league games - having played both recent World Cup qualifiers for his country.

There is better news concerning Mathieu Flamini and Mikel Arteta, however, with both midfielders expected to be available, while Laurent Koscielny will have a late fitness test.

Watford, meanwhile, are set to welcome back Ikechi Anya and Valon Behrami, who both picked up injuries on international duty. Nyom is also expected to be fit, but Lloyd Doyley (neck), Jose Manuel Jurado (hamstring) and Joel Ekstrand (knee) are sidelined.

Arsenal boast a strong record against Watford, having won all five of their previous meetings, including the last four in the Premier League.