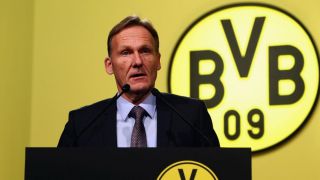 Having finished bottom of the Bundesliga at the halfway point of the domestic season, confidence was low at the Signal Iduna Park, but a revitalised Dortmund have started to turns things around.

Three successive victories has seen Dortmund climb away from the danger zone and into 12th place, allowing Watzke to dream of a top-half finish – something that seemed impossible in December.

CEO Watzke has been impressed with the turnaround under Jurgen Klopp and believes the repair work is already showing signs of success.

"The confidence is back [at Dortmund]," he told the club's official website. "We have scored 10 goals in the last three games.

"We have sorted the Bundesliga, [now] we need to fix the other [the Champions League]."

Surprisingly Dortmund's European form was not impacted by their Bundesliga woes and they return to action on Tuesday against Juventus in Turin with Watzke not ruling out taking a lead back to Germany in the last-16 tie.

"We're playing one of the best teams [in Europe], that can win against any team in the world."