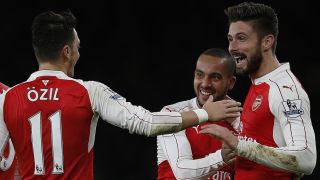 Arsenal manager Arsene Wenger hopes his strikers can continue scoring after a "weight" was lifted off their shoulders in the FA Cup.

Olivier Giroud ended an 11-match goalless run with a brace and Theo Walcott also struck twice in their team's 4-0 win over Hull City on Tuesday.

With Arsenal eight points off top spot in the Premier League, Wenger would like to see his attackers build on their recent goals.

"It is a weight on the shoulders when the players don't score," he said ahead of their cup quarter-final against Watford on Sunday.

"Giroud has cycles so it was a weight off his shoulders. Walcott too, and it's the same for Alexis [Sanchez] as well who scored against Tottenham.

"He suffers maybe more than everybody when he doesn't score."

In the Premier League, Arsenal are the fifth-highest scoring team, with Giroud (12) and Sanchez (7) their main contributors.

Wenger believes form and confidence could play a big part for his forwards late in the season.

"Football has to be instinctive and you have to play with freedom. When you play with a bit more freedom, when the goals are natural. Every striker will tell you that," he said.

"Now I hope he has a repetition of his former spell and starts to score again."