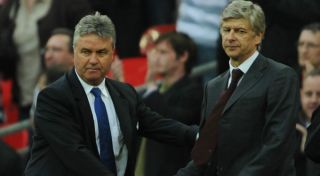 The Arsenal manager has been at the helm of the famous London club for almost two decades, with his contract set to run until the end of the 2016-17 season.

Since taking over Arsenal, Sunday's opponents Chelsea have appointed 13 managers, while after Wenger, AFC Bournemouth's Eddie Howe is the next longest-serving manager in the Premier League as he approaches four years in charge.

But Hiddink said that once the Frenchman is finished, no other manager will match Wenger's tenure for longevity.

"I think it depends on the club, on the philosophy, but he might be one of the last to sit on a chair that long," Hiddink said.

When asked about why managers no long remain in the one job for as long in the modern day, Hiddink said: "Maybe the instant result is required. I don’t know why.

"The clubs who maintain their philosophy and calmness are not panicking after two defeats."

Hiddink replaced Mourinho on a temporary basis after the Portuguese manager parted ways with Chelsea following a terrible start to the season.

And while Mourinho enjoyed reminding Wenger of how few Premier League titles he had to show for his 19 years - he has not captured a league crown since 2004 - Hiddink believes Arsenal's faith in Wenger is refreshing in a time where managers are so easily sacked.

"Him being in charge regarding those nine years without a title means there is a lot of confidence from the board – from both sides to see they can go into a future where they are stable," Hiddink said.

"But there are many clubs fighting in England, it’s competitive.'