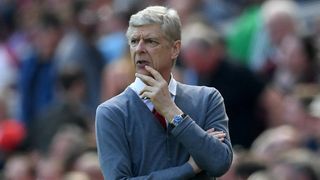 Arsene Wenger suppressed "the animal inside" to make a success of his 22-year reign as Arsenal manager.

Wenger will leave the Gunners at the end of the season, having led the club to three Premier League titles and seven FA Cups.

With his departure announced last month, the French coach has enjoyed something of a farewell tour, allowing Arsenal fans - with whom he has endured a mixed relationship in recent years - ample opportunity to say goodbye to the man who has led the club for more than two decades.

Wenger admitted to finding aspects of his exit "strange" but has learned to keep his emotions in check.

"Yes [I get emotional]. But I am very passionate and at a very young age I realised that if I want to survive in this job I have to get control over my emotions or I will not survive," he told his final pre-match news conference.

"I don't know if you can imagine but at 33 years of age I was responsible for a top team in France and I'm 68 today and I never stopped.

"So it is a long learning process of controlling who you really are, controlling the animal that is inside you.

And what will be the boss' final team talk?“I will say to the players that the best way to prepare for the future is to win their last game and go into next season with a positive mindset.”May 10, 2018

"That helps me a lot because I went through some fantastic periods in my life, as well as more difficult periods.

"And the fact I managed to keep control of my emotions and my reactions helped me to do my job.

"After I finish here I can reconnect a bit and be a bit more who I really am.

"You have seen one aspect of me and that is a desperate guy who wants to win football games and I suppose that's the thing that matters and what is really a big part of my personality."

Highlighting his longevity in the Arsenal hot seat, Wenger added: "There are 20,000 trees [at the training ground]. I saw them all when they were small and they are now massive.

"I will greet every one of them before I leave and say thank you."