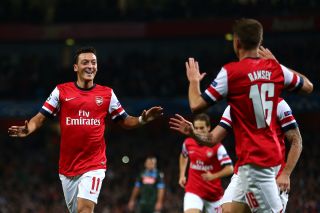 The Germany international midfielder scored his first goal for the club since his deadline-day move from Real Madrid when he side-footed home superbly from Aaron Ramsey's cross with just eight minutes gone.

Ozil, Arsenal's record signing, then turned provider as his cut back allowed Olivier Giroud to tap home seven minutes later to ensure Wenger celebrated 17 years in charge of the club in style.

Arsenal were more conservative in their approach in the second half against Rafael Benitez's side as the Premier League leaders looked to retain their comfortable advantage.

Wenger was particularly glowing in his appraisal of Ozil's performance after the game, as he told Sky Sports: "(In the) first half he was absolutely amazing.

"Everything was in there. Collective skill, individual skill, finishing. All that you dream to see in the stand when you come to see football.

"It's good (for Ozil to get his first goal). When you take too long to score it is on your mind but he got rid of that."

Wenger believes the club's next two fixtures in the Champions League against Borussia Dortmund are crucial to their progress to the round of 16.

"We can not start any better," he continued. "The next two will be the deciders.

"We want to come back after the international break and play like that against Dortmund."