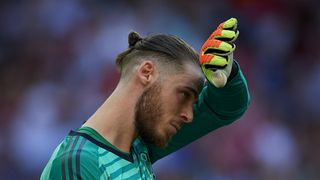 David de Gea says Spain are "f*****" after their early World Cup exit, but will recover.

De Gea could not keep out any of Russia's penalties as the hosts progressed to the quarter-finals 4-3 in a shoot-out following Sunday's 1-1 draw in Moscow.

Koke and Iago Aspas were denied by Igor Akinfeev as Russia dumped the 2010 champions out.

But De Gea - criticised for his poor performances throughout the World Cup - pledged Spain will bounce back.

"To those who supported, suffered and criticised us with respect, thanks," De Gea wrote on Twitter.

De Gea had a tournament to forget, saving one shot from 11 on target faced - including penalties.