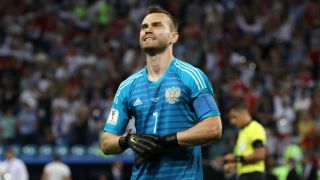 Igor Akinfeev has ended his 14-year international career on the high of captaining Russia to the World Cup quarter-finals.

The long-serving goalkeeper revealed his decision to step down from the national team on Monday in order to concentrate on club side CSKA Moscow.

Akinfeev debuted as a teenager and went on to collect 111 caps, starting his first major tournament in Russia's run to the final four at Euro 2008.

The 32-year-old's crowning moment came on home soil a decade later as he memorably made two shoot-out saves in the last-16 success against Spain.

"Every story has a beginning and an end," Akinfeev wrote in a statement on CSKA's website.

"My story with the national team has come to its logical conclusion. It was a great honour for me to captain Russia at our World Cup.

"To be honest, I had never dreamed such a thing was possible. But it happened and was probably the peak of my international career.

"Fifteen years in international football is a long time. With each passing year it becomes harder to play on two fronts. Bearing in mind my prior injuries, I need more and more time to recover.

"And I have realised that it is time to step aside in favour of my younger colleagues, and focus on my beloved club, CSKA. I leave with a calm conscience - Russia have very talented and promising youngsters, some of whom proved their leadership skills at the World Cup."