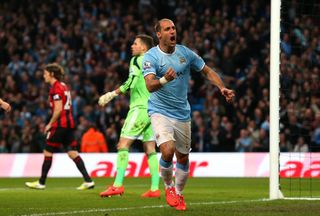 City won their first Premier League crown two years ago at the Etihad Stadium when goals in injury time from Edin Dzeko and Sergio Aguero capped off a remarkable comeback against QPR.

A final-day 3-2 win saw City crowned champions on goal difference ahead of rivals Manchester United in one of the most thrilling title races of recent times.

Zabaleta reckons City are a stronger team for that experience and is hopeful it will stand them in good stead for this season's run-in.

"I think we were talking about that (2011-12 title win) this week," said the Argentina international in quotes reported by the British media.

"We know we have been in this situation two years ago and the most important thing we have learned from that time is the team spirit, to keep fighting and keep going.

"Hopefully, we can continue winning all the games and show one more time that these players, this manager, this team, with the staff still working hard, is very hungry for the title."

City capitalised on leaders Liverpool's 2-0 loss to Chelsea with a victory over Crystal Palace by the same scoreline on Sunday, leaving them three points behind Brendan Rodgers' side with a game in hand.

Manuel Pellegrini's men have a superior goal difference and can be confident that winning all of their final three games will be enough to finish top of the pile - though Chelsea are still in the mix, too.

Zabaleta continued: "We cannot forget Chelsea. They have a top team, they have a top manager. They showed they are still very hungry for the title.

"Everything is very tight at the top and it is going to be a fantastic race between now and the end.

"We said before Crystal Palace we need Liverpool to drop some points. They have but nothing is settled."

City have a particularly poor record at Goodison Park, where they head on Saturday, having won there just twice in 16 Premier League matches.