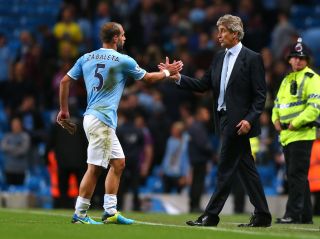 Manuel Pellegrini's side went ahead at the Cardiff City Stadium through Edin Dzeko but an effort from Aron Gunnarsson and two Fraizer Campbell headers, both from corners, turned the tide as the Welsh side won 3-2 in their first home top-flight outing for over 50 years.

Zabaleta vented his frustration at conceding from set plays, but attributed any misunderstandings at the back to a change in system.

City regularly practiced zonal marking under Roberto Mancini and the Argentina international believes Pellegrini's move to man-marking could have been costly.

"Two goals from set pieces for us is hard," he said.

"It has changed for us as last season we were marking zonally and now it is individual marking and sometimes it is hard.

"But Campbell was very strong in the air. They did well defensively and closed the space well and didn’t give us the chance to create many opportunities.

"We didn't defend well at set pieces and it cost us the game.

"We had control of the ball but we were a bit static in the first half. We were the better team but the only difference was we didn’t defend well from the set pieces and conceded silly goals."