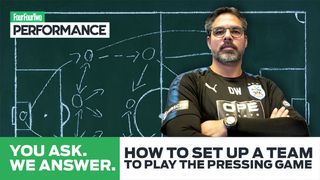 Goalkeeper
The goalkeeper should be a shot-stopper, first and foremost, but he has to have good distribution as well – he needs to be good with his feet. I also like my goalkeepers to be comfortable playing with a high line and anticipating the ball coming over the top so they can claim the ball and start attacks.

Defenders
Our full-backs need to possess attacking skill so they can join in with the offensive side of the game and also tremendous physical attributes so they can get up and down the pitch for 90 minutes. The centre-backs must be forward thinking and confident in one v one situations. Good aerial ability is also desirable and if they are quick then that is a great bonus.

Midfielders
We normally have a deeper playmaker who finds the right position after we lose the ball and it is his job to win it back immediately. He needs to be a real worker and a fighter. Alongside him we have a more creative midfielder who can create dangerous passes in behind the back four and play the final pass.

Wingers
Our wingers need to be fast and they have to have great endurance. I need them to be able to attack and defend. If they have the intelligence to find good positions in the box then they will also be a goalscoring threat - I like that in wide players.

Strikers
All of our offensive players have great skills to beat players inside and outside in one v one situations. They can put crosses in and shoot and occupy dangerous areas. They must also share the same quality as the rest of the other players - they must also be able to defend; we want them to be capable of being effective in both halves of the pitch.

David Wagner’s top pressing tip
One of our mantras is that everybody has responsibility for everything. Our defensive players have responsibility in attack and defence and it is the same for the attacking players.