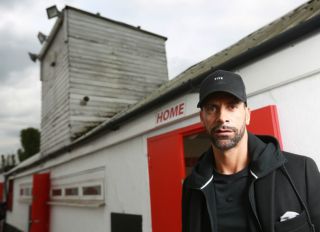 You played with so many talented young players - what's the difference between those who make it and those who don’t?
The brain. Those who make it are able to take in information and then transfer that to the football pitch. They realise what they need to do to elevate themselves to a different platform in terms of producing performances on a consistent basis. I’ve seen so many players with great talent but they can’t marry it together to produce that great player that’s inside them. I always talk about Cristiano Ronaldo, he had everything but it wasn’t all married together at 18. However, he was intelligent enough to take all of his attributes and slowly cement them together to become the player that he is.

Do you think England are producing a different profile of player now, for example Jadon Sancho and Marcus Rashford? Andy why are there more these types of players?
The academies have to take some credit, but I think social media is playing a big part in a lot of the development of young players now. Youngsters are seeing so many more tricks and skills that they’re able to practise and then execute on the pitch. When I was a kid, the Cruyff turn and the stepover were the two main skills to beat a man. Now, a Cruyff or a stepover is a basic part of the game, like a pass or a tackle. Players are being influenced earlier and a lot more often. Technology, games consoles, they play a part as well. Younger players now with social media, some of them are getting reputations based on their Instagram profiles and clips on Snapchat, because people want to see that in short, snackable media. If they can do the skills people crave, they'll grow in popularity, which is probably a big motivation for them.

Are modern footballers better athletes than players from your era? Can you be a top player now without being a top athlete?
You can’t live a lifestyle now like players did in the 1980s. You can’t go out drinking, clubbing and socialising every weekend. Now you’re playing three games in a week sometimes and you have to live your life the right way, eat the right food, prepare and recuperate for games. It’s all fine tuned now, there is no stone left unturned when it comes to preparing your body for performance.

What advice would you give to the 18-year-old Rio Ferdinand if he was coming through the ranks today?
Work hard and have a hungry, hungry work ethic. Have the desire to improve yourself all the time. Live a very clean lifestyle and always enjoy your football. I wish I’d started yoga earlier for suppleness and resisting injuries. And probably done more leg training and power and strength work. Other than that, I don’t have too many regrets about my career.

Is social media an unnecessary distraction for young players trying to breakthrough?
It’s the world we live in, it’s there. You can’t say players shouldn’t use it. It’s just the way in which we use it which is important. If I was a player now I wouldn’t be using it the day before, on the day or probably the day after a game either. If we’d lost or drawn I wouldn’t be on social media for a day or two afterwards.

Do you think players too friendly towards one another now?
I never hugged or kissed players in the tunnel. I used to hate seeing other players doing it in the tunnel. I remember seeing Gerard Pique doing in the tunnel with Cesc Fabregas once and we were like ‘what are you doing?’ ‘You’re all huggy, huggy with your friends.’ Maybe that’s an old school mentality, because you see Barcelona v Real Madrid, all the players are hugging and kissing in the tunnel before the game. It’s unbelievable but some cultures are different. I didn’t even want to look at other players. Jermaine Defoe said to me ‘Rio man, why are you so serious man?’ I said ‘you’re trying to beat my team, I don’t want to talk to you, I’ll talk to you afterwards.’

Do you think the modern game is as competitive as it was, in terms of the physical battles we used to see between teams?
Definitely not. Man United v Arsenal was always crazy; Man United v Liverpool games were always wars. Man United v Man City became more of a rivalry towards the end of my time there. I just don’t see the same intensity in these games anymore; there isn’t the same fire. We were never asked to go out and kick lumps out of each other but there just isn’t that ferocity that used to be there.

Rio Ferdinand is part of the BBC team for the World Cup. The BBC will provide extensive coverage of World Cup 2018 across TV, radio and online from June 14.