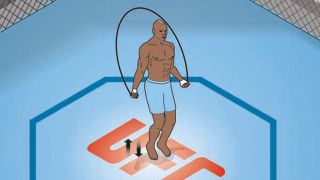 To boost endurance, get him to run for 400 metres at three-quarter pace, rest for a minute and go again. Repeat five times. To put this in perspective, one rep is about the same as running the length of three football pitches. He’d want to get his heart rate up to 170 beats per minute. This type of training will help him run (and fight) harder for longer.

Use this to help Mario develop explosive power in his legs. Get him to stand in front of a knee-high bench or box with his feet shoulder-width apart. Have him bend his knees, drive up through his body and up on top of the box. Then step back down, reset and go again. Do this five times.

This is another great exercise for building leg strength and agility. Set up two sturdy boxes, around two yards apart. Get him to jump onto the first box, leap down to the ground, before springing straight onto the second. Dismount, rest for 20 seconds, walk round to the first box and repeat. Do this five times.

For Mario to shift his big frame with speed and strength, he needs to be nimble and powerful driving off one foot. Skipping can develop these areas and boost stamina. Get him to skip for 20 seconds, sprint for 10, skip for 20, sprint for 10 and so on. Ask him to do this for 10 minutes.

Show us your footwork

Set out a speed ladder and position Mario behind the ladder at the far end. Get him to step inside the first square with his right foot, then his left, before stepping back out and to the right, one foot after the other. Then move onto the next square, until he’s completed the ladder. Work for 20 seconds, rest for 20. Repeat eight times as fast as possible.

This is great for building acceleration and balance. Connect a resistance band to a piece of apparatus and tie the other end to his waist. Stand 12 yards away with a ball. Ask Mario to accelerate until the band is taut, and as he does this play a pass into his feet. He has to return the pass before going back to the start position. Do two sets of six reps.

“I got more injuries in football than I do fighting”

You were a promising footballer. What happened?

Football was my main love when I was growing up and it still is to be honest. I played for Rushden & Diamonds before I suffered a knee injury at 21 and had to stop playing. But I couldn’t stay away and I started training again. I got into MMA [mixed martial arts] at 26 after a friend of mine, Del Edwards, suggested I try the sport. I soon found out I was a better fighter than a footballer.

What’s more unforgiving – the octagon or the pitch?

In MMA you pick up a lot of superficial injuries, which aren’t as bad as they look. In football you tear muscles and ligaments, which take a lot longer to heal than cuts or bruises. I suffered worse injuries playing football than I’ve ever suffered fighting. My legs took a beating.

How does training for MMA differ to that of football?

MMA is harder because you’re up and down, grappling and wrestling, whereas in football you’re just running making lots of short, sharp bursts. Fighting is demanding on your whole body. Saying that, the only time I’ve thrown up was during pre-season football training.

Ninety minutes of football or five-minute rounds of fighting – which is harder?

Fighting – without a doubt. Football is a team sport. You could be the best player on the pitch and still lose a match. Or you could have the worst game of your life and win. MMA is solely dependent on you. If you have a bad day or if you take your foot off the pedal, the guy takes you down and he’s on top of you, punching you in the face!

Are any skills from the pitch used in UFC?

Because I played a lot of football my legs are quite big and strong, so I have a solid base, with very good hips, which makes me harder to take down. Also, my punches are more effective because punching power comes from your legs.