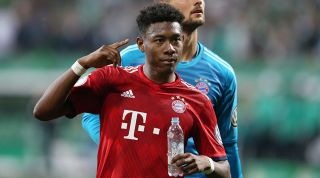 A no-brainer, really. Luka Jovic is a great prospect, but the Eintracht Frankfurt youngster is inexperienced and there are significant doubts about his ability to deliver immediately at the highest level. Icardi can definitely do that.

The Argentine grew into superstar at Inter Milan, but his days at San Siro are numbered and he desperately needs a new challenge. Icardi is a ruthless penalty area predator who thrives under pressure, doesn't care about public opinion, and bangs in goal after goal. With decent service he could be unstoppable in La Liga.

Now in his prime at the age of 26, the ex-Barcelona starlet is surely eager to prove the Catalans wrong for not believing in him. The perfect fit from all aspects. Real must get him.

Raphael Varane's future is uncertain and Sergio Ramos isn't getting younger. Real Madrid need a top-quality centre-back who is able to perform here and now.

Eder Militao, already signed from Porto, might not be the immediate answer, but Marquinhos could do the job. He is still just 24, but has seven years of experience at the highest level – six of them at Paris Saint-Germain. The Brazilian can't spend his entire career in Ligue 1 if he wants to fulfil his potential, and this might be the right time to move on. His ability to perform as a midfield holder is attractive too.

The Tottenham star has reportedly agreed personal terms with Real Madrid, and it's easy to understand why Los Blancos want the Dane. Luka Modric isn't far from being finished, and the team needs a top-quality schemer who makes things tick.

Eriksen is just as industrious as the Croat, but provides more through-balls and assists, is a much more prolific scorer and better at taking free-kicks and corners. At the age of 27, he is experienced and would easily fit into Zidane's system.

Bayern Munich have made world champion Lucas Hernandez their record signing, paying Atletico Madrid €80 million for the Frenchman. Granted, he can play as a centre-back too, but the Germans clearly see him as a left-back and that means David Alaba's place in the team is no longer a certainty.

The Austrian can be used as a midfielder, largely thanks to Pep Guardiola's efforts, but his best position is on the flank and he should be targeted by Real Madrid as a replacement for the Juventus-bound Marcelo. Alaba didn't enjoy his best season in 2018/19, but at the age of 27 he should flourish in Madrid.

With Casemiro – a firm Zidane favourite – still going strong, Madrid can afford to invest in an up-and-coming holding midfielder who should gradually grow into a top player. Ndombele is the right man.

His rise at Lyon has been startling, and the Frenchman combines power, grit and vision with an ability to boss the field. He has proven to be the real deal over the last two seasons at Lyon, who are likely to demand about €100 million for their man. There's a feeling that the final price could eventually be a bit lower, however, and the 22-year-old might develop into one of the best players in the world in his position.

Well this is obvious, isn't it? The Belgian is about to leave Stamford Bridge after seven years in order to fulfil his boyhood dream. Hazard aspires to become the real heir to Cristiano Ronaldo, and the expectations on his shoulders would be huge.

Is he up to the task? Only time will tell, but Zidane definitely needs his genius. It could be a perfect match.