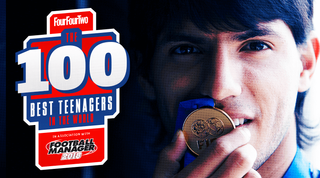 Hopes were high for Richards back in 2008; months before he was revealed as the 10th highest-rated teenager in Football Manager, Manchester City manager Stuart Pearce told reporters he “would love to see Micah stay, captain the club, maybe be here for 10 years and carry the club on his back if he can”. Not much, then.

The subsequent takeover by mega-rich Abu Dhabians didn’t exactly help Richards’ chances of becoming a decade-long fixture, but nobody would have predicted the extent of his recent decline. A loan switch to Fiorentina in 2014/15 bore little fruit, before a permanent switch to Aston Villa the following season took the right-back down to the Championship, where he’s struggled for game time this term.

It wasn’t all bad at City, though: before being ousted by Pablo Zabaleta he was a regular for six seasons from 2006 onwards, and played an integral role in City’s astonishing 2011/12 title win under Roberto Mancini.

Still only 29, Marcelo has nevertheless spent more than a decade at Real Madrid having joined the Spanish giants from Fluminense in January 2007.

The attack-minded left-back was still finding his feet at the Bernabeu when he was named among Football Manager’s top teens a year later, and many doubted whether he had a long-term future at the club after a poor run of form under Juande Ramos in 2009.

In truth, it feels as though Marcelo has only recently won over his sizeable contingent of doubters. The interpretation of him as defensively poor was always unfair, but in the last few seasons the Brazilian has proved beyond doubt that he’s one of the world’s best players in his position.

Another who’s been with his current employers since 2007, Hamsik is closing in on Diego Maradona’s scoring record for Napoli – at the time of writing, he needs just two more goals to overtake the Argentine’s tally of 115.

Likened to Juventus great Pavel Nedved early in his career, Hamsik has evolved over the years; he tended to be employed as part of a front three during Walter Mazzarri’s time at the Stadio San Paolo between 2009 and 2013, but he’s moved deeper in recent seasons and now plays in Maurizio Sarri’s midfield trio.

Hamsik has still only won trophy at Napoli – the Coppa Italia in 2012 – and will be desperate to help end the club’s 27-year Scudetto drought this term.

Kuzmanovic has carved out a decent career for himself, playing in the top flights of Italian, Swiss, German and Spanish football – but it’s hard to shake the feeling that he never quite lived up to his early promise.

Named Swiss Golden Player of the Year in 2006, the midfielder left Basel for Fiorentina the following January. His time in Tuscany was a success but by 2009 Kuzmanovic was on the move again, joining Stuttgart for £7m. He’s represented Inter, Basel (again) and Udinese since then, and can currently be found plying his trade on loan at Malaga.

Although he’s not pulled on a Serbia shirt since 2014, Kuzmanovic will hope for an international recall in time for the Russian World Cup next summer.

De Guzman was thrusted into Feyenoord’s first team shortly after his 18th birthday, and his club had extremely high hopes for him. The Dutchman, who was born in Canada to parents of Filipino and Jamaican descent, played 31 times in his debut campaign of 2005/06. By 2008, he was a permanent fixture in the Rotterdam side’s starting XI.

De Guzman was close to signing for Manchester City in summer 2009, but the proposed deal fell through and he stuck around for a another year before joining Mallorca.

Unfortunately for the midfielder, it’s been a tale of injuries and inconsistency ever since: De Guzman has spent time at Mallorca, Villarreal, Napoli, Swansea, Carpi, Chievo and Eintracht Frankfurt in the last eight seasons, averaging just over 26 league appearances per club.

Aissati became the youngest Dutch player to feature in the Champions League in 2005, playing for PSV against Milan aged 17 years and 64 days. Despite his considerable talent, however, PSV sold the attacking midfielder to Ajax in 2008 – but an early knee injury halted his progress in Amsterdam.

Aissati struggled to recover from his bad start and was on the move again in 2012 after just 41 Eredivisie outings for Ajax. First, he spent at season at Turkish outfit Antalyaspor, then stayed at Akhmat Grozny in the Russian Premier League from 2013-16.

He returned to Turkey at the end of his contract, penning a deal with Alanyaspor, and can now be found at second-tier side Balikesirspor.

Anderson didn’t spend much of his senior career at Gremio – just 31 first-team appearances before joining Porto in 2006 – but he’ll forever be idolised after scoring the goal which earned the Imortal Tricolor promotion back to Série A.

He didn’t last long in Portugal either, stopping off for just a single season with Porto before earning his big move to Manchester United.

The Brazilian certainly had his moments during an eight-year spell at Old Trafford – he contributed to four Premier League titles and their 2008 Champions League triumph – but he never lived up to his billing as a potential superstar.

After an unsuccessful loan stint at Fiorentina in 2014/15, Anderson returned to Brazil with Internacional at the end of the campaign, and is now on loan with Coritiba.

By the time of his 20th birthday, Aguero had racked up 23 goals in 56 games for Independiente, played two full seasons at Atletico Madrid (scoring 34 times in 92 outings) and won five caps for Argentina.

He’s only occasionally slowed down since – and only through injury. He ended his Atletico career with 101 goals in 234 games, and won the Europa League in 2010.

Aguero’s been even more prolific at Manchester City since signing for £38m in summer 2011, and became their all-time record scorer after netting for the 178th time in his 264th City appearance against Napoli.

Milan didn’t need long to make their mind up about Pato: the teenage striker had played just 10 league games for Internacional before being snapped up for €24m by the Rossoneri in summer 2007.

He made his debut for the Italians the following January and immediately hit the ground running, scoring in a 5-2 defeat of Napoli on his Serie A debut.

Pato reached double figures in his first three full seasons at San Siro and helped Max Allegri’s side win the title in 2010/11 – but injuries began to bite and he was forced to return to Brazil in 2013; first with Corinthians, and subsequently Sao Paulo.

A curious loan spell with Chelsea followed in the second half of 2015/16, before Pato – still only 28 – moved on to Villarreal and current club Tianjin Quanjian.

Benzema was barely 17 when he pulled on a Lyon shirt for the first time in January 2005. The striker played six times in total as Les Gones claimed their fourth consecutive Ligue 1 crown that season, before becoming a prominent member of their first team the following year.

The 2007/08 campaign was Benzema’s best on an individual level, as he scored 31 goals in all competitions. The Frenchman spent one more year at Lyon before Real Madrid came calling in 2009, paying €35m to bring him to the Bernabeu.

Benzema has had his critics ever since, but his value to Madrid has been undisputable; as well as averaging around a goal every other game in all competitions, he’s been a vital foil for Cristiano Ronaldo and played a major role in helping the club win two La Liga titles and three Champions Leagues over the last eight years.

FourFourTwo's 100 Best Teenagers in the World 2017