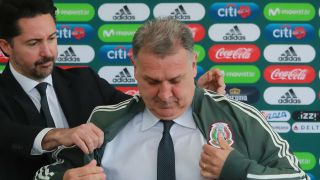 Mexico have confirmed the appointment of former Barcelona and Argentina boss Gerardo Martino as their new head coach.

That result ended a run of bad luck for the 56-year-old, who lost the 2011, 2015 and 2016 Copa America finals over his spells with Paraguay and Argentina, while he also came up short in the 2013 Primera Division Superfinal with Newell's Old Boys and 2014 Copa del Rey showpiece when in charge of Barcelona.

Mexico have a similarly unwanted streak they wish to break, having qualified for the past seven World Cup finals and lost in the round of 16 on each occasion.

The details of Martino's contract were not disclosed but, speaking at a news conference alongside his new head coach on Monday, Mexican Football Federation (FMF) president Yon de Luisa said the country was "looking forward for the challenge of Qatar 2022".

Incondicionales, this is the beginning of a new journey!!

Martino takes charge of an exciting new generation of Mexico players, led by PSV forward Hirving Lozano, who scored the winning goal in their triumph over Germany at Russia 2018.

The first challenge awaiting Martino's new-look Mexico will be regaining the CONCACAF Gold Cup this year, with Juan Carlos Osorio having led a weakened squad at the 2017 edition of the tournament due to his side's Confederations Cup commitments.