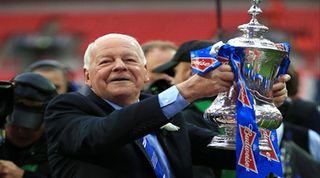 A significant percentage of people who watched Saturday's FA Cup final on ITV believe that Dave Whelan became the first septuagenarian to win the famous trophy.

Features about Whelan accounted for one hour and 45 minutes of ITV's two-hour pre-match build-up, with the 1960 FA Cup final being mentioned more than 6,000 times.

As kick-off approached, the coverage controversially cut away from opera quartet Amore's rendition of Abide With Me to a version Whelan had recorded earlier with modified lyrics relating to the 1960 FA Cup final and his leg break.

During the game itself, the producer frequently cut away to Whelan, rather than show live action. Indeed, for much of the first half, ITV viewers were only able to see Whelan reacting to pictures of Whelan reacting to match events on Wembley's big screen.

Research by FourFourTwo revealed that, when quizzed on what had happened, over 70 percent of viewers believed Dave Whelan had shrugged off Jack Rodwell and netted the winner himself.

Over 50 percent stated that Whelan had 'certainly been on the field', while nearly 25 percent insisted that Whelan had taken on Manchester City single-handed, many claiming to have vivid memories of the elderly chairman getting the better of Gael Clichy and whipping over some tantalising crosses.

"I'm not quite sure where Wigan came into it," one typical questionnaire response read. "The commentators did say Wigan every now and again but Whelan won it, right?"

Wigan must now turn their attentions to fighting for Premier League survival, while Whelan can prepare for his maiden Europa League campaign, as FourFourTwo understands it.