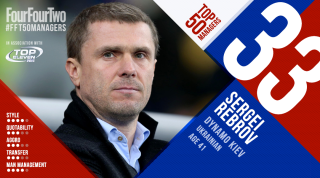 As far as saviours go, Sergei Rebrov didn’t appear a likely candidate to lead Dynamo Kiev, Ukraine’s biggest club, to a resurgence. Installed initially as caretaker manager in April last year, he was a club legend with no previous experience as head coach and his appointment left an impression of the club having run out of ideas.

But within a month, his Dynamo side won the national cup, bringing a five-year drought to an end: from 2009 to 2014 they’d only won the 2011 Ukrainian Super Cup, which generally isn’t seen as a ‘proper’ trophy. They had to come to terms with being in the deep shadow of Shakhtar Donetsk, an emerging continental giant.

In 2013, they finished outside the top two in the Ukrainian Premier League for the first time in history; the following season they even slipped to fourth place.

What was even more striking about Rebrov was the fact that he took over amid conflicts in the Donbass region, which would soon see the east of the country turned into a war zone, with pro-Russian separatists fighting against government forces. This was already after the Russian annexation of Crimea.

A matter of fact is that Rebrov is an ethnic Russian, who was born in the Donbass area and started his career with Shakhtar before moving west to Dynamo. On the very day of his appointment in Kiev, a member of the Ukrainian parliament was kidnapped outside the city council in Horlivka, Rebrov’s hometown, before being tortured and murdered by pro-Russian militants. Dozens of civilians were later killed, many buildings destroyed, and Horlivka is now part of the self-proclaimed Donetsk People’s Republic.

Now, we may think we understand what the manager’s ethnicity could imply and what kind of doubts could have appeared in his mind – or in the minds of Dynamo supporters. But, take it from someone who – like this writer – has already witnessed his country torn apart by ethnic tensions, these things are never black and white and the ‘ethnic versus national’ allegiance is always highly individual. Rebrov has been reluctant to talk about it – but when Dynamo thrashed Everton 5-2 in March to reach the Europa League quarter-finals, he stated that it represented a “success for the whole of Ukraine”.

“It doesn’t matter where I’m from,” he told ESPN. “My heart is with Ukraine. We want to be united, no matter where we’re from.”

However, he hasn’t shown too much understanding for the troubles his team’s rivals, Shakhtar, found themselves in. They had to play their ‘home’ games in Lviv, almost 800 miles away from Donetsk, where their Donbass Arena sustained heavy damage by artillery shelling. After Shakhtar manager Mircea Lucescu said on several occasions that the league in its current state is “an abnormal championship” and “artificial”, Rebrov replied that those were “excuses of the weak”.

Granted, Dynamo’s title challenge was helped by Shakhtar’s unfortunate situation – and also by the fact that Metalist Kharkiv ran into financial difficulties – while Dnipro were perhaps distracted by their unexpected run all the way to the Europa League final. Still, what Rebrov has done in Kiev is nothing short of remarkable.

Dynamo won the double for the first time since 2007 and did so without a single defeat in the league or cup. They also easily won their Europa League group and progressed to the quarter-finals, where they were eliminated by Fiorentina. They’ve also looked much more like a team than in recent years, their accomplishment above all a collective effort.

“Previously, Dynamo’s footballers played for themselves, being focused on either defence of attack. Now, there are glimpses of a team game: we defend and attack together,” Rebrov explained.

This improved approach is reflected in the fact that they only conceded 12 goals in the league (shortened, however, to only 26 matches last season), while scoring 65; the previous year they scored 55 and conceded 33 in 28 games. Striker Artem Kravets bagged 15 and winger Andriy Yarmolenko added 14, along with 14 assists (he recorded 19 goals and 21 assists in all competitions). The rest of the load was distributed across the squad – 16 other players found themselves on the goalscoring sheet and none contributed more than five.

Rebrov’s side doesn’t have any true stars; instead it’s a compact unit, aggressive, fluid and well-prepared both physically and tactically. Because of it, he is seen as a worthy successor to the great Valeri Lobanovsky, whose shadow is always lurking in Kiev.

The legendary innovator led three different historical Dynamo teams, steering them to glory and defining a style. His legacy proved a massive weight for coaches who came after him, but the 41-year-old Rebrov, who played under Lobanovsky in the 1990s before being transferred to Tottenham for £11 million in 2000, is handling it very well so far.

He acknowledges the former boss was a major influence and calls him his “second father”, but the former Spurs and West Ham man is also very keen to keep learning. Over the winter break he went to Manchester to watch City’s training sessions, and he also spent time with Jurgen Klopp at Dortmund. In that, he is also very much like Lobanovsky, who kept evolving and adapting his approach to training and tactics.

And Rebrov has certainly done some evolving since his playing days. In England, he really struggled to adapt to a different playing style and his impact was modest. Back then, few people could see the introverted forward, who was an amateur radio enthusiast and lover of whodunnit novels, as someone whose future lies in coaching. Now, having led the Kiev renaissance in his first full season at the helm, he is being hailed as saviour.

New challenges lie ahead – Dynamo will try to defend their domestic double and go as far as they can in the Champions League – but Rebrov and his side now seem well placed to deal with them.