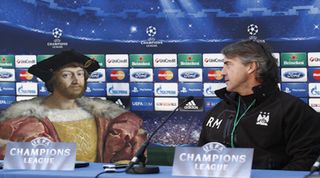 Manchester City's deadline-day business has suffered a setback, as the man who the club had identified as their number one target, Giovanni Pico della Mirandola, was today revealed to be not a trophy-hungry marksman with a nose for goal, but a fifteenth-century syncretic philologist.

The defending Premier League champions had hoped to bring in a striker to replace the departing Mario Balotelli, but their search is set to continue, after officials in Italy confirmed that the influential philosopher, most noted for his Oration on the Dignity of Man, had died in 1494.

"We had been looking for someone with experience, creativity, and an impressive track record, and Giovanni seemed to fit the bill," said City executive Brian Marwood. "We were also very impressed by his grasp of rhetoric and his mastery of numerous classical languages."

"Unfortunately, what counts at the end of the day is the ability to put the ball in the back of the net, and for all Pico's skill at illuminating the cabalistic undertones present in early Bible verses, there's no evidence that he ever played football, or indeed, any other sport."

Sources at Eastlands have confirmed that the club will no longer work with Pico della Mirandola's agent, Bruno Giordano, who overcame being burned at the stake for black magic in 1600 to carve out a respectable Serie A career with Lazio.

With just hours left before the transfer window shuts, City are expected to turn their attentions to Edinson Cavani, who, though not a Renaissance humanist, is the spitting image of Sandro Botticelli's Man with a Medal of Cosimo de' Medici.