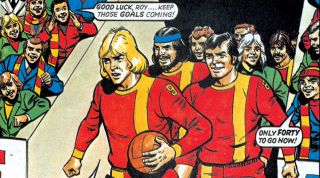 "I remember my debut like it was yesterday. I'd joined the first team with my great friend Blackie Gray and I was lucky enough to score twice in a 3-3 draw with Elbury. It was a real see-saw encounter; we led 2-0, then went 3-2 down before I levelled late on with a left-foot drive from about 18 yards out. I should have been ecstatic but I wasn't happy with my performance – I'd flagged badly during the second half and struggled to cope with the step up.

"I clearly remember Elbury's England forward Arty Hedlow grabbing me at the end and saying, 'Not a bad show, kid! But you're not quite up to this class of soccer yet. I guess you'll be back in the reserves next week. Tough luck!' That was a bit underhand. I told him I'd knock his thundering block off, which I regret now, but I guess emotions were high at the time."

"I never got to lift the World Cup like Bobby Moore sadly, so this was probably the pinnacle of my playing career in a team sense. We faced the crack Italian outfit Nettruno in the European Cup final in Paris, but our preparations were complicated by the fact that Blackie Gray had got himself mixed up with a French film star named Suzanne Cerise, who I believe was stepping out at the time with a stuntman named Ed Garrard.

"Blackie arrived late, only just making the game, and by half-time we'd been run into the ground and were 2-0 behind. Luckily, I had a wizard plan – I brought Suzanne into the changing room to give the lads a little pep talk. I remember as clear as if it was yesterday what she said: 'Mes heroes! You win for me, yes? I have a surprise for you eef you do.' Needless to say we turned things around to win 3-2 – I scored the first, Blackie scored the winner – and Suzanne made good on her promise by throwing a lavish party to celebrate. Of course, she announced at that bash that she was marrying the stuntman, which was disappointing to Blackie, but we'd won the European Cup for the first time."

"Ah, what a predicament that was – and that's an understatement! We were in South America to play Bagota in the Intercontinental Cup but we'd been kidnapped by local brigands, deep in the jungle, purely because they wanted us to play an exhibition match against them. We beat them 17-2 despite some very... let's say agricultural challenges on their part, but we had to escape on horseback and only arrived at the stadium to face Bagota just before kick-off. We hadn't slept for 48 hours so we could barely move, and it was all I could do to stay awake out there.

"Now, Bagota should have been out of sight but we reached half-time and it was only 1-0, at which point the cavalry arrived. A couple of the brigand rebels came and, as a peace offering, gave us all a rejuvenating potion they called carioca juice. I have no idea what was in it but it did the trick all right and we were fresh as the proverbial daisy after that. I scored twice, the second a close-range overhead kick, so at least all was well that ended well."

"I've chosen this game not because I scored twice, which was nice, but because I was able to blood one of the new signings in it – Spandau Ballet pop star Martin Kemp. Kempy scored as well, with a fine volley, and his performance was vindication of us signing him and his band-mate Steve Norman from Rockola Wanderers.

"A lot of people thought that double signing was just a gimmick, as they did when we brought Bob Wilson and Emlyn Hughes out of retirement, appointed Geoffrey Boycott chairman and made Radio 1 DJ Simon Mayo our Honorary Vice President. But that was never the motivation. The Spandau boys were fine additions, and my word, they kept us entertained in the changing room with some of their hits."

5. Rising from the ashes

"This was significant for the fact that it was the first game for the 'new' Rovers. I had to sign almost a new team that summer after eight of the squad died during a bungled kidnap attempt in war-torn Basran. That was quite an episode, of course. First we were kidnapped by terrorists, then rescued by the SAS, then a rebel carrying a bomb crashed into our coach as we were being driven to safety, which killed eight of the lads in the process. Carl Hunt, Neville Jones, Kenny Logan, Jimmy Slade, Vic Guthrie, Noel Baxter, Trevor Cassidy – they all died with their boots on. It's still hard to talk about to this day.

"Poor old Deans Park were swept away on a tidal wave of emotion. We could have won with a team of apprentices that day."

"The game that saw us seal the league title, of course, but there was far more on the line that afternoon than just that. At the start of that season I'd been roped into a very public wager with the 'soapbox' TV pundit Dennis 'Chippy' Croker, whose goalscoring record I was close to beating. He was a bit of a 'character', of course – he used to have a catchphrase 'Silly ole sport, ennit?' – and he'd suggested I was too far past my prime to beat his record of 435 career league goals. I never gamble, of course, but I took him up on his challenge because if I won, he'd have to pay £10,000 to charity.

"I'm proud – and relieved – to say I broke it in the final game of the season with my last touch of the ball – a real Racey rocket that won us the title. Honestly, you couldn't make it up."

"I obviously didn't know it at the time, of course, but this was my final game. The helicopter I was flying to scout a young lad named Darren Lewis went down in a ball of flames as I approached the stadium. I was left in a coma and when I came round I found my left foot had been amputated, so that was that, really. My only regret is that I didn't sign off with a goal!

"But I can't complain. I played at the very top level for almost 40 years, scored 481 goals, played, captained and managed Melchester and England, lifted 44 trophies, survived several kidnap attempts, being shot at by rebel forces in a South American civil war, and by a mystery assassin in my office. I guess you could call it a pretty full and varied career. I can't complain!"