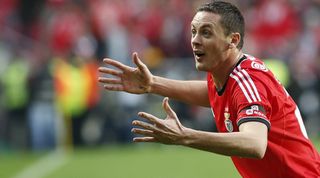 When Nemanja Matic first came to Chelsea, many people were left wondering who the heck he was and what he was doing at the Stamford Bridge. Brought in from the Slovak Corgon League in August 2009 for £1.5 million, he was largely unknown: neither a teenage wonderkid nor a regular member of his country's national team.

He also looked slightly peculiar – his rather small head set on top of the skinny 6ft 4in body, with particularly long limbs fluttering around his torso like larch twigs in the wind. Matic seemed just as fragile: that summer, his appearance for Serbia at the U21 Euros in Sweden was cut short after the player broke a metatarsal bone in his right foot, following a challenge from Italy's Sebastian Giovinco, who is a full foot shorter than him. The whole deal sounded like a bad joke.

Nevertheless, it was an inspired signing – although Chelsea would only realise that years later and decide to re-sign him for 15 times the amount they originally paid. Luckily for Jose Mourinho, the midfielder – lauded as Portugal's Primeira Liga Player of the Year in the meantime – is still in love with the Blues and he shunned interest from the likes of Real Madrid and Manchester United once he learned they wanted him back. "I want to prosper, to grow as a footballer and play in a stronger league," he told the Portuguese media. "I wanted Chelsea, because that's the club I love – just as I love Benfica."

Matic is not the type of character who would hold a grudge for a long time, because rejection seems to be a recurring pattern for him. He was born in Vrelo – a village just off the provincial town of Ub, which is best-known as the birthplace of arguably the best Serbian footballer ever, Dragan Dzajic.

As a kid, Matic tried his luck with both the Red Star and Partizan Belgrade youth academies, only to be told he'd never make it as a footballer. So he ended up with the lower-league side Kolubara Lazarevac, where he made his senior debut. But he didn't seem to have much going on for him there either, so when the opportunity came for a trial at MFK Kosice, a mediocre Slovakian top-flight outfit, he welcomed it – and eventually signed for them in 2007.

There he soon became a starter, while Vladimir Vermezovic, the former Partizan gaffer who was coaching another Slovak club at the time, recommended the Serbia U21 team try him out. They did, but by December 2008, Matic was already fully capped in what was a highly experimental line-up for a senior friendly against Poland; in February 2009, he also appeared in another friendly against Cyprus. It would take him further three years to record his next cap, but that was his breakthrough season, as he lead Kosice to fourth place in the league and the national cup.

And that's when Chelsea came knocking. While still recovering from his foot injury and unable to play right away, he was signed on a four-year deal. "I know I am not well known," the 21-year-old told the club's website, also revealing he had unsuccessfully trialled at Middlesbrough that January, "but I have physical power and I am quite a technical, left-footed player. I will show everyone why I am at Chelsea."

He didn't. While making only three appearances as a sub, he made the news for a whole different reason: proposing to his hometown sweetheart Aleksandra via an interview in the Serbian tabloid Alo!. She accepted, but first had to finish high school before she could permanently join him in London. Only that residence wasn't permanent for Matic either, as he was shipped out on loan to Vitesse in the Dutch League for the 2010/11 season. He played well there, but still failed to make the grade upon his return to Chelsea, so was offloaded to Benfica as a makeweight in the David Luiz transfer.

That, as it turned out, was the best thing that could happen to his career. Coach Jorge Jesus has built quite a reputation for player development and Matic was next in line to benefit from working with him. In Lisbon he flourished into one of most coveted central or defensive midfielders in Europe. He was instrumental for the Portuguese giants on their way to the Europa League final last year, where they were beaten by none other than Chelsea – but Matic's inpidual display in that match was eye-catching.

The season ended on a disappointing note for Benfica, as they finished as runners-up in both domestic competitions as well, but Matic was named the league's Player of the Year, having won the monthly award three times over the course of the season. The day after scoring a wonderful volley in the O Classico against Porto in January 2013 (which came second in voting for the 2013 FIFA Puskas award: check it out below), the club gave him a contract extension until 2018 with a buyout clause set at €45m. After previously falling out with coach Sinisa Mihajlovic, who had ignored his talents, he also returned to the Serbia national team, making his competitive debut there against Croatia in September.

Not only did Matic continue to prosper as a player, but he also got physically stronger, proving versatile and equally adept for either the central midfield or holding position. He's not the fastest guy around but works hard in defence, shielding the ball and breaking up opposition play with tackles, interceptions and aerial power – his reading of the game is exceptional. He switches the tempo and launches attacks from deep, proving particularly effective in unlocking dense opposition backlines with his attractive lobs and chips into the box.

"Matic is a good player," Jose Mourinho recently told Portuguese newspaper O Jogo. "He is wise and stable. He is a player who looks very mature on the pitch." And then he decided to bid for him. The Chelsea midfield may be already packed with players who can fill his position, but Mourinho's recent usage of David Luiz as holder suggests the manager is looking for a different alternative to balance the trio of more attacking players in front of him. Matic, who is both physically imposing and creative, could be the answer he was looking for. Otherwise, throwing a reported £22 million at a player they already once failed to integrate into the first team (and who can't play in the Champions League this season) would be just silly – even by Chelsea's standards.

Right from the start of his career, Matic took a road less travelled, but seems to have finally reached his destination. Every time he was written off, he only came back stronger and better – which is why his second coming to the Blues camp is bound to be a success.