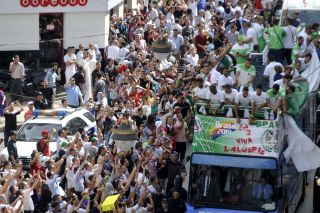 “Across the vast space of the continent, it is perilous to generalise too boldly what [the unique way Africans interpret the game] may be, except that from Alexandria to Cape Town, you hear Africans stubbornly arguing for their favourite game’s specific, African identity, a purity and daring they want preserved.” Ian Hawkey, Feet of the Chameleon

Where did our game go? What is the African identity? And what became of this African ‘purity and daring’ on the football field? After a World Cup of dizzying highs, excruciating lows and fist-clenchingly infuriating frustrations, this extract from Hawkey’s excellent book on African football in 2010 springs to mind.

When reviewing Africa’s fate at World Cup 2014, there’s an argument as to whether the balance sheet leaves the continent in the red or green. Perform a Google News search for African football and, from the headlines, you could be forgiven for thinking 2014 was a catastrophic failure. According to some, African football leaves Brazil in the red.

They may have a point. No amount of sugar in all the mills of Brazil is sweet enough to coat over the fact that Cameroon and Ghana completely and unequivocally disgraced themselves. From the minute Cameroon refused to board their plane in protest over bonus payments you could detect the faint whiff of indignity about their World Cup campaign, and this only grew to a powerful stench once they took to the field.

Playing in a desperately negative 6-3-1 formation in their opening game against Mexico, devoid of ideas, spirit and heart, Cameroon’s campaign started badly and descended from there, concluding with Alex Song’s shockingly irresponsible elbow, Benoit Assou-Ekotto headbutting his own team-mate and two four-goal spankings. Many in Cameroon lay blame for the wretched campaign at the feet of their German coach Volke Finke, who laid a rod for the Indomitable Lions’ backs with his negative tactics and often bizarre team selections and subsitutions (or lack thereof). A national debate is ongoing. The recriminations rumble on.

Ghana too left the competition with very little sympathy. After charming the world in 2010 with their spirited style of play and refreshing joie de vivre, this was a Ghana side ultimately brought down from within by internal rumblings over bonus payments and bust-ups so acrimonious that president John Mahama has sacked the minister of sport and his deputy, and ordered an official inquiry into the disaster.

The unseemly sight of John Boye kissing his share of the £1.76m cash shipped over to Brasilia to ease the crisis ahead of Ghana’s crucial group game against Portugal will sadly live long in the memory. Such scenes, while not reflective of the whole continent, are difficult to defend and make fantastic headline fodder for the ‘haha Africa is a joke’ brigade.

The aforementioned search for African purity and daring on the field is another reason the naysayers may regard World Cup 2014 with an air of concern. The death of the African playmaker remains a pressing issue. While teams in the last eight are all blessed with crafty central creators, No.10s capable of changing a game in an instant, Algeria aside, the dearth of such players in African teams was once again highlighted in Brazil.

Where is the next Jay-Jay Okocha, Nwankwo Kanu or Abedi Pele? Where is Africa’s Neymar or James Rodriguez? Players of this ilk were conspicuous by their absence in Brazil. In tight games, the key to unlock rigid defences was often missing. It’s the next piece of the jigsaw if African teams are to progress from here.

Look on the bright side

Nevertheless, there’s also an argument that Africa leaves Brazil comfortably in the green. For the first time ever, two African teams qualified from the group stage of football's biggest tournament.

This may sound insignificant – CONCACAF enjoyed watching three of its four teams advancing, after all – but it’s a creditable feat when you consider that, despite being a vast, sprawling continent of a billion people, Africa remains a baby on the international football stage.

Until 1982 FIFA deemed Africa worthy of just one World Cup spot, and even that solitary space had to be fought for bitterly.

In an age of huge geo-political change, the continental blocs of Asia and Africa ended up boycotting the 1966 World Cup in protest at FIFA president Stanley Rous’ Eurocentric reluctance to recognise regions growing increasingly emboldened against the old colonial powers.

The sheer youth of African football on the world stage is regularly overlooked. At the 1958 World Cup, for example, Europe was allocated 11 places in a 16-team tournament. Africa and Asia had to fight for one place between them – and even then FIFA’s convoluted rules meant the winner had to win a play-off against another European team to qualify.

To date only five African nations have participated in more than three World Cups – Cameroon, Nigeria, Algeria, Tunisia and Morocco. By comparison, England’s 1966 triumph came at the fifth attempt. Against this context, two qualifiers from the group stages represents another step forward. Africa is growing in World Cup experience and the progress, while too slow for some, remains steady.

This was clear on the pitch. Only Cameroon lost any group game by more than one goal, while Algeria became the first African team to score four goals in a World Cup game. Both second round games against European heavyweights France and Germany were settled by small margins – in Nigeria’s case poor refereeing decisions dramatically altering the game at crucial moments.

Amid all the finger wagging, negativity and (unproven) match-fixing allegations – legendary former Cameroon international Joseph Antoine Bell was unimpressed by this, stating “a serious publication doesn’t say there are rumours of corruption, it provides evidence” – there are accusations that African football has gone backwards, that it lacks integrity or purity. This is simply not true.

Where did our game go? Rest assured, it’s still there. It’s in there, in the joy on the faces of the hundreds of thousands of people from Algiers to Barbes when Islam Slimani headed home the equaliser past Igor Akinfeev to send Algeria to the second round of the World Cup for the first time in their history. It’s there in the pious, quiet dignity of Vincent Enyeama as he led his team-mates in pitchside prayer before marching them into battle against Lionel Messi’s Argentina.

It’s there in the one-two hot stepping of Asamoah Gyan and the Black Stars as he smashed in Ghana’s second against Germany in Fortaleza to put his country 2-1 up, dancing away like we were back in South Africa and Ghana was Ghana again just for a few, brief, wonderful seconds.

It’s there in the tears of Serey Die, a man broken by the sheer honour of rising from the ranks at Volcan Junior to representing his country at the pinnacle of world football, and the sacrifice of Kolo and Yaya Toure, playing days after learning their younger brother was lying dead in Manchester, holding in the pain and playing on because there was but a slither of a hope of achieving the unprecedented – helping Ivory Coast qualify for the first time.

It’s there in the warmth of Samuel Eto’o’s embrace as he hugged a local boy he had got to know during Cameroon’s stay, a clinch only the most hardened cynic can watch without melting just slightly – without realising that behind all the hot air, beneath all the bluster, these professional footballers we scrutinise, judge, berate and castigate were kids once themselves, with idols, hopes and dreams of making it to a World Cup, to international stardom. It’s there in Halihodzic’s awkward dancing and his proud tears after Germany eliminated his inspired Algeria side in extra time, in Kenneth Omeruo – arguably the young player of the tournament – Serge Aurier and Vincent Aboubakar, youngsters who must now carry the torchlight, a new generation of African talent.

Football is as much about the journey as it is the destination. This World Cup provided many long-lasting memories. Each of the five nations that represented Africa in Brazil leave with lessons to learn, no doubt. Nonetheless, there are reasons to be optimistic.