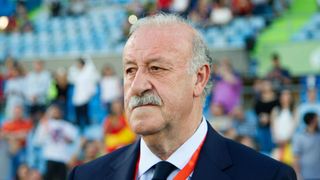 Vicente del Bosque confirmed on Thursday his Spain career is over, leaving a daunting challenge for the candidates vying to take over one of world football's powerhouse teams.

The 65-year-old had already revealed ahead of Euro 2016 that he intended to leave his position after the tournament, but he refused to confirm as much after his side's disappointing round-of-16 defeat at the hands of Italy, fuelling speculation he could stay on after all.

There was no U-turn performed, though.

"Without a doubt, I have no intention to remain as coach, but you have to be discreet. No matter what the result of the Euros, I had no doubt about what my future would be," Del Bosque told RNE.

With that, Del Bosque's eight-year reign came to an abrupt end.

Some will, perhaps unfairly, remember him for the disappointments suffered in the second part of his Spain era, with La Furia Roja hopelessly crashing out in the group stage of the 2014 World Cup, before another premature exit in France last month.

The veteran coach deserves better than that.

Del Bosque inherited a hugely talented squad from Luis Aragones when he took over after Euro 2008, but he took them to another level in the next four years.

Spain reached the 2010 World Cup by winning all 10 qualifiers, seeing off Bosnia-Herzegovina, Turkey and Belgium on the way. They started the tournament with an unfortunate defeat at the hands of Switzerland, but then went on a six-game winning streak, defeating Netherlands in the final to lift the World Cup for the first time.

Not content with the world title, Spain then went on to make history by becoming the first country to successfully defend the European Championship as Del Bosque managed to keep his squad hungry for more success.

Italy managed to record a creditable draw in the group stages, but were put in their place in the final, with David Silva, Jordi Alba, Fernando Torres and Juan Mata all on target in a ruthless 4-0 win as Spain made it two continental titles in succession.

Admittedly, their stock has significantly fallen in the subsequent four years, but Del Bosque remains the most successful coach in the history of the country's national team.

Second half of Del Bosque's spell in charge of unimpressive, but well ahead of his predecessors numbers wise. July 1, 2016

Although Spain were slightly less solid in defence under Del Bosque than they were under Aragones, they more than made up for it going forward. Del Bosque not only made Spain the dominant force in football, but he did so with attacking football.

That makes the vacancy still more challenging for the candidates in the frame to succeed him.

Coaching some of the world's best players remains an enticing prospect, but the Spain job - as far as improving on Del Bosque's achievements - looks like something of a mission impossible at this stage.

Not only because the core of Spain's successful team is slowly saying farewell to the game, with Carles Puyol, Xavi Hernandez and Xabi Alonso all already having retired from international duty in recent years, but mainly because Del Bosque has set the bar outrageously high over the past eight years.

Good luck to whoever is tasked with following those historic feats.