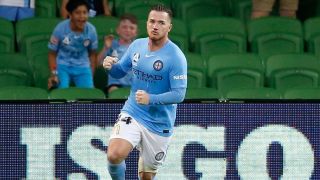 Ross McCormack scored both goals as Melbourne City came from behind to beat Wellington Phoenix 2-1 on Saturday and move up to third in the A-League table.

Roy Krishna put the visitors ahead on 42 minutes at AAMI Park, capitalising on some hesitant defending before lifting the ball over goalkeeper Dean Bouzanis from close range.

Andrija Kaluderovic was inches away from doubling Wellington's lead 11 minutes into the second half but his header from Krishna's cross came back off the underside of the crossbar and bounced clear.

McCormack levelled the scores when he pounced at the left-hand post to steer in a deflected low ball, giving City hope of ending their three-match losing run.

And Warren Joyce's side claimed a sixth win in a row against Wellington thanks to McCormack's second 10 minutes from time, the striker beating the offside trap to nod home Daniel Arzani's curling cross.

McCormack: "I think the club might be talking to Aston Villa now about if I can stay for the season." January 6, 2018

The result lifts City ahead of Adelaide United and Melbourne Victory, who were held 1-1 by Central Coast Mariners earlier on Saturday.

Besart Berisha opened the scoring for Victory in Geelong but Blake Powell levelled to secure a point for the eighth-placed Mariners.