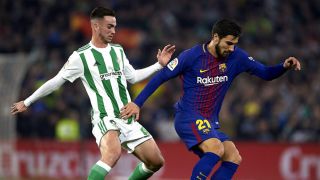 Real Betis youngster Fabian Ruiz has fended off admirers by committing to his boyhood club until 2023 in a quirky 'First Dates' style video.

The 21-year-old has emerged as a real prospect at the Seville-based club this season, playing 17 times in LaLiga this term.

His form has seen him linked with a number of clubs both in Spain and abroad - Newcastle United, West Ham and Inter are said to be those paying the most interest.

Speculation had increased since he played a starring role for Betis in their dramatic 5-3 win at bitter rivals Sevilla on January 6.

But Betis have successfully tied Fabian down to a new deal that will link him to the club until 2023, reportedly doubling his previous €15million release clause.

And the announcement came in a video inspired by TV dating show 'First Dates', with Fabian saying "I've come to let you know I'm not looking for a date, I've been in love with Real Betis since I was eight years old."