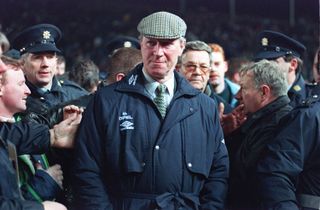 Jack Charlton should have been knighted after helping England win the 1966 World Cup, according to former Liverpool and Republic of Ireland midfielder Ray Houghton.

Charlton, who later handed Houghton his international debut in his first match in charge of Ireland against Wales in March 1986, died on Friday aged 85, his family announced in a statement.

As tributes poured in from his former clubs and the Premier League announced black armbands will be worn by players at all matches this weekend, Houghton labelled Charlton a “legend” after winning a clutch of honours with Leeds as a player and helping the Republic qualify for the 1990 and 1994 World Cups and Euro 1988.

But while younger brother Sir Bobby was among a number of England stars to receive knighthoods in the years after they lifted the Jules Rimet trophy, Jack did not, which left Houghton incredulous.

“He was a larger than life character,” Houghton told talkSPORT.

“The word legend is used too much in football but not for Jack, for what he’s done domestically with Leeds, winning the World Cup, which he should have been knighted for, I’ve still never understood that, I think that’s an absolute disgrace and the fact that he did so well with Ireland.

“He changed everything about Irish football because there was a stage where we hadn’t qualified for tournaments, we had some great players and very good managers but didn’t quite get over the line.

“Jack came in and changed that mentality, got us through two World Cups and one European Championship. His legacy within Ireland is absolutely huge.”

Ex-Leeds team-mate Johnny Giles insisted Charlton would make his all-time XI but said the arrival of Don Revie changed everything for the defender at Elland Road.

Giles told BBC Radio 5 Live: “It wasn’t always great times at Leeds for Jack. It was just after Don Revie took over that it became great.

“Up to then Leeds had a few years in the First Division, but they were mostly in the Second Division. Don Revie changed the face of Leeds United and was a huge influence on Jack’s career.

“I believe when Don took over Jack didn’t have a very good reputation in training and he was prepared to let him go if he didn’t buck up and get on with the job.

“Jack then really took off from there as a major centre-half. In my 10 years with Jack, for five of those 10 years he was the best centre-half in what is now the Premier League.”

Mick McCarthy was appointed Republic captain by Charlton and went on to succeed the former defender as manager of the national side in 1996.

“It was the happiest time of my career, he made it simple for me and I’ll always remember him for that.

“I wasn’t the best player in that team, nowhere near. But he saw something in me and I’ll never forget him for that.”

John Aldridge, Houghton and McCarthy’s former Republic team-mate, tweeted: “Absolutely gutted that Big Jack has passed away! What a football man, loved and adored, specially in Ireland. The best manager I was lucky to play for.

Absolutely gutted that BIG JACK has passed away!What a football man,,Loved and adored,specially in Ireland.The best manager I was lucky to play for.The times we had on and off the pitch was priceless !my thoughts are with pat and the family!RIP my good friend Never Forgotten !!— John Aldridge (@Realaldo474) July 11, 2020

“The times we had on and off the pitch were priceless! My thoughts are with (wife) Pat and the family! RIP my good friend. Never forgotten!”

Townsend told Sky Sports: “He was an Englishman becoming the Irish national team manager at a time when it wasn’t always easy politically and for various other reasons, but as Jack always did he breezed into it and took it by the scruff of the neck.

“For that he was a very, very special man and it was a great honour to have worked with him and known him because he was just such a special guy.”

Mark Lawrenson remembered a telling-off he received from Charlton after he scored the winner for the Republic against Scotland in a Euro 1988 qualification match.

“The whistle goes and a minute later Jack comes onto the pitch and he is coming over to me,” Lawrenson told BBC Radio 5 Live.

“I am thinking he will give me massive congratulations for scoring the goal to beat Scotland and we are on our way to the Euros, but he gave me the biggest b******ing ever.”

The Premier League announced players will wear black armbands and there will be a minute’s silence in all matches this weekend in tribute to Charlton.

Former England striker Gary Lineker tweeted: “Saddened to hear that Jack Charlton has passed away. World Cup winner with England, manager of probably the best ever Ireland side and a wonderfully infectious personality to boot. RIP Jack.”

Saddened to hear that Jack Charlton has passed away. World Cup winner with England, manager of probably the best ever Ireland side and a wonderfully infectious personality to boot. RIP Jack.— Gary Lineker (@GaryLineker) July 11, 2020

“A true giant of English football, Jack will forever be remembered for his significant contribution to our World Cup win in 1966 and for being a warm-hearted, thoughtful man,” he said.

Jack Charlton was a football great whose achievements brought happiness to so many. My sympathies are with his family and friends.— Boris Johnson #StayAlert (@BorisJohnson) July 11, 2020

“He left an indelible impression on our national game and was guaranteed an affectionate and warm welcome wherever he went. A huge presence on and off the pitch, Jack will never be forgotten at Wembley.”

Manchester United manager Ole Gunnar Solskjaer paid tribute to Charlton at the start of his press conference on Saturday morning, calling him “a legend of football and a gentleman”.

UK Prime Minister Boris Johnson tweeted: “Jack Charlton was a football great whose achievements brought happiness to so many. My sympathies are with his family and friends.”