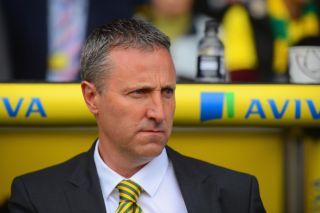 Coach Adams has witnessed his side slip into the drop zone following a run of six defeats in seven matches, including a 4-0 rout at Manchester United on Saturday.

Norwich's chances of survival appear slim as their last two Premier League matches are against Chelsea and Arsenal.

However, Adams is adamant the whole squad are prepared for the challenge of preserving the club's top-flight status.

"There are two massive, massive games and we need to take points from those games," he told BBC Radio Norfolk.

"I can see character in the dressing room. There are people that are hurt by that performance on Saturday.

"What we have to do is to have character at Stamford Bridge and then again against Arsenal the following week.

"We have to make sure we are at it in these last two games. We knew the challenge before the Man United result.

"We'd have liked to have gone into the next two games with a little bit more from Saturday's result.

Adams has yet to secure a point since replacing Chris Hughton at Carrow Road earlier this month, overseeing defeats to Fulham, Liverpool and United.