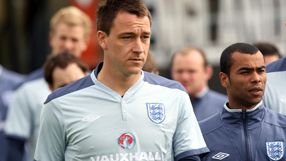 The 30-year-old centre-back is set to lead out his country in a European Championship qualifier against Wales this Saturday, just over a year after he was stripped of the role amid newspaper stories alleging an affair between him and the ex-girlfriend of former Chelsea and England team-mate Wayne Bridge.

Terry’s past indiscretions mean the decision to restore him to the captaincy has divided opinion in the country, but Adams is convinced the Chelsea captain’s position on the field and exceptional leadership skills make him the outstanding candidate for the armband.

“The captain is the mouthpiece; he’s someone who puts the managers’ ideas onto the pitch,” said the 44-year-old, speaking to Yahoo! in partnership with the LMA.

“I always thought I was carrying that managers’ ideas, game plan, structure, discipline and professionalism onto the pitch so I think you have to set an example. It’s really, really important – it sets the tone.

“John Terry definitely has those qualities, he’s a leader. In that central defensive area you can get your message on to everybody.  If you’re a right-back and you’re playing on the other side of the pitch, you’ve got to shout to get a message over and that’s a bit difficult.

“I’d never put a forward as a captain, they’re a different breed. It would be a defender every time for me and John Terry has certainly got those qualities.”

Regardless of who leads the national team out at the European Championships next summer, however, Adams believes their chances of lifting the trophy are slim. He insists there needs to be a complete overhaul of the FA coaching system before England can hope to beat Spain and the rest of Europe’s elite.

“I think radical change needs to go on in the development [of English players]. The National Football Centre is long overdue and we need six regional camps. We need to educate the educators for better quality coaching and improve the whole structure if we are ever going to compete with Spain.

“We’ve got the passion but we’re lacking in some other areas. I don’t see this current group of players challenging Spain.”