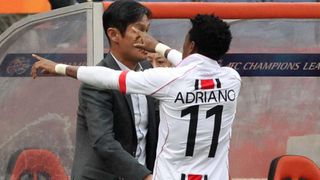 Adriano scored twice as Seoul took a three-point lead at the top of AFC Champions League Group F with a 4-1 win away at Shandong Luneng, while Guangzhou Evergrande Taobao remain bottom of Group H after throwing away a two-goal lead against Urawa Reds.

Adriano put Seoul ahead at the Jinan Olympic Sports Centre Stadium when his volley squirmed beyond Wang Dalei, but Jucilei's header restored parity in the second half.

However, three goals in the space of six minutes saw Seoul surge to victory and take control of the group in the process, Adriano tapping home his ninth of the campaign after excellent finishes from Dejan Damjanovic and Ko Yo-han.

Defending champions Guangzhou's search for a first win continues after they drew 2-2 with Urawa, despite Ricardo Goulart scoring twice in the opening 15 minutes.

An error from Guangzhou goalkeeper Zeng Cheng enabled Yuki Muto to pull one back from the visitors, who earned a draw with one minute of normal time remaining when substitute Shinzo Koroki fired home.

Kohei Shimizu's fine finish capped Sanfrecce Hiroshima's 3-0 win over Buriram United at the Edion Stadium, leaving the Thai side bottom of Group F and without a point.

Sydney moved to the top of Group H with Chris Naumoff's first-half strike proving the difference in a 1-0 triumph over Pohang Steelers at Steelyard Stadium.

Bunyodkor and Zob Ahan played out a goalless draw, while El Jaish beat Nasaf 1-0 and Al Nassr drew 1-1 with Lekhwiya.