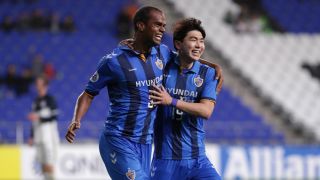 Ulsan emphatically ended Melbourne Victory's chances of escaping Group F with a 6-2 hammering of the Australian side in the AFC Champions League on Wednesday.

Junior Negao and Mislav Orsic struck doubles, while Lim Jong-eun and Kim Seung-jun were also on target to lead the 2012 winners into the knockout stages.

Substitute Kenny Athiu and New Zealand international Kosta Barbarouses grabbed late consolations for third-place Victory, who will be unable to leapfrog the K League 1 side in their final outing due to an inferior head-to-head record.

Ulsan will finish second behind Shanghai SIPG, who were held to a 1-1 home draw by Kawasaki Frontale after Elkeson's 68th-minute opener was cancelled out later by Kei Chinen's header.

Hulk blasted over a first-half penalty against his former employers, but the 31-year-old returned to tee up the goal that ultimately secured top spot.

Shanghai SIPG and are through to the Round of 16 after securing the top two spots in Group F! April 4, 2018

Tianjin Quanjian became the second Chinese Super League club to reach the last 16 courtesy of a late 1-0 win at Kitchee in Group E.

Anthony Modeste nodded the only goal in the 89th minute to sew up a top-two finish for Paolo Sousa's men, leaving Hong Kong-based Kitchee with just three points from five games.

The Japanese side needed a result to retain any hope of advancing, but goals from Ricardo Lopes and Lee Dong-gook either side of half-time sealed progression for group leaders Jeonbuk.