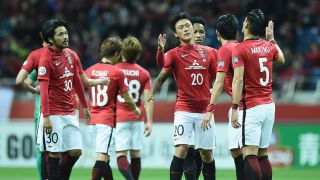 Rafael Silva scored twice as Urawa Reds battered Western Sydney Wanderers 6-1 to reach the AFC Champions League round of 16, while Shanghai SIPG, Muangthong United and Kashima Antlers also qualified for the knockout round.

Urawa, champions in 2007, only needed a point at Saitama Stadium to progress from Group F, but produced an emphatic performance against Wanderers.

Takahiro Sekine curled home the opener in the 14th minute and Zlatan Ljubijankic added a second before Tadanari Lee's tap in made it 3-0 to the Japanese side before half-time.

Jumpei Kusukami put A-League side Wanderers on the scoreboard just after the hour, but Urawa substitute Silva scored twice in the space of eight minutes and wrapped up a fine cameo by laying on an injury-time assist for Shinzo Koroki.

Shanghai are also through from Group F with a match to spare, having had a nervier affair in a 4-2 win over FC Seoul.

Seoul needed a win to keep their slim hopes alive and Maurinho put the visitors ahead, only for goals from Hulk, Zhang Wei and Wu Lei to put Shanghai into a 3-1 half-time lead.

Park Chu-young briefly threatened to bring Seoul back into the game, but Oscar's 74th-minute strike settled any Shanghai nerves.

Group F standings after Matchday 5 of the ! Congrats to and Shanghai SIPG for qualifying for Round of 16! April 26, 2017

Muangthong knew a win over Brisbane Roar would be enough to take them through from Group E, and goals from Xisco Jimenez, Chanathip Songkrasin and Teerasil Dangda helped secure a 3-0 win.

Mu Kanazaki was on the scoresheet twice as Kashima Antlers routed Ulsan Hyundai 4-0 to join Muangthong in making it out of the group.

Kanazaki's close-range effort opened the scoring and, after Pedro Junior netted from outside the area to make it 2-0, the midfielder pounced on a goalkeeping error to extend the lead before Leo Silva's late goal completed the win.