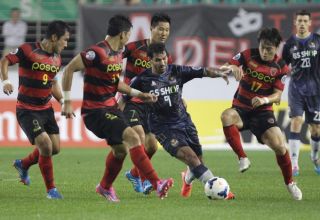 Goalkeeper Yu saved all three spot-kicks at the Seoul World Cup Stadium and Mauricio Molina held his nerve to score the winning penalty and send the hosts through after the two sides played out another tense goalless draw in the second leg on Wednesday.

Yu guess right to deny Hwang Ji-soo, Kim Jae-sung and Park Hee-chul from 12 yards, with Everton Santos, Osmar Barba and Molina making no mistake as only Kim Jin-kyu failed to convert his spot-kick for the home side.

Choi Yong-soo's Seoul side remain on course to reach the final for a second successive year, but they will need to add a cutting edge after failing to find the back of the net against the K-League champions over two legs.

Pohang, who had Shin Kwang-hoon sent off for a second bookable offence five minutes before the end of extra time, will reflect on what might have been after they spurned chances and had plenty of possession but failed to make it count.

Steelers coach Hwang Sun-hong had been bullish about his side's chances of reaching the last four, having gone unbeaten in the competition this year, and they made a bright start to the second leg as Park Sun-ju tried his luck with an acrobatic overhead kick but failed to hit the target.

Seoul had to wait until 31 minutes in for their first shot on goal, when Yun Il-lok's strike was comfortably dealt with by Shin Hwa-yong in a disappointing first half.

The second half was also lacklustre, with neither side giving anything away, and Pohang defender Cha Du-ri fired over the crossbar nine minutes after break as extra-time always looked likely.

It was a similar story in the additional period, although Kim Jae-Sung went close with a free-kick after 93 minutes and there was finally some drama five minutes from time when Shin was given his marching orders after picking up a second yellow card.

Yu then took centre stage as Pohang's finishing also let them down from the penalty spot to ensure their Champions League campaign came to an end, Molina sparking mass celebrations by converting the winning effort.