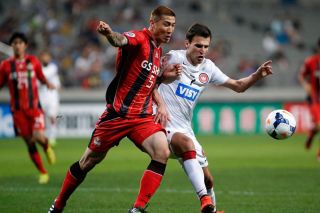 The Wanderers held firm to restrict the hosts to few chances and will head back to Parramatta in a fortnight confident of getting the job done.

Without strikers Tomi Juric and Brendon Santalab – as well as winger Shannon Cole – through suspension, Tony Popovic's side struggled to create many opportunities and were held scoreless for the first time in the competition.

But they were resolute in defence and now know a win in their home leg in two weeks will make them just the second Australian club after Adelaide United in 2008 to make the Champions League final.

After enjoying large chunks of possession early on, the Wanderers were soon under pressure as the home side upped the tempo.

There was a lucky escape for the visitors on 17 minutes though when a mix-up between Brendan Hamill and Nikolai Topor-Stanley on the halfway allowed Escudero to race clear towards goal.

But Hamill managed to chase down the striker and get in a crucial block just as he was about to get his shot in.

The lively Kwabena Appiah was the Wanderers’ best outlet of a stodgy first half as they struggled to unlock Seoul’s often deep-lying defence.

Their best sights of goal came from distance as both Vitor Saba and Mateo Poljak tried their luck without seriously threatening Yu Sang-hun’s goal.

Desperate to find a way to unlock the Wanderers defence, Seoul coach Choi Yong-soo brought on his South American playmakers Everton Santos and Mauricio Molina on at the break.

And immediately they made a difference, in particular Molina who not only created chances for others but was a whisker away from breaking the deadlock midway through the second half.

Cha’s drilled cross from the right pierced the Wanderers defence, with Molina’s volley flying inches wide of the post.

Saba came more into the contest as the match wore on and played a couple of brilliant throughballs that almost provided chances for Mark Bridge, while Labinot Haliti also blazed a great chance wide.

The Wanderers were forced to defend deeper late on as the home side pushed hard for a vital goal, with Santos giving them a scare with a powerful shot from distance which Covic tipped over the bar.

But the visitors’ organisation and structure held firm to leave the tie perfectly set up for the second leg on October 1.