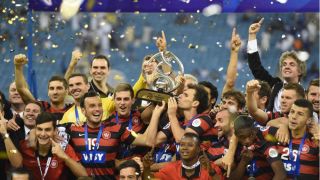 Wanderers defeated Al Hilal 1-0 on aggregate in November to become the first Australian club to become Asian champions, and Tony Popovic's side return to the competition in Group H, which also includes Kashima Antlers, Guangzhou Evergrande and FC Seoul.

Western Sydney's first test is away to the Antlers on Wednesday and, although the Wanderers have been struggling on the domestic front to sit bottom of the A-League, Popovic cannot wait to test his team on the continental stage.

Evergrande will host Seoul in the other Group H match.

"We go to a fantastic tournament now to defend our title. We'll go to Kashima and try to repeat that," he said after the Wanderers' 2-1 loss at Adelaide United on Saturday.

"We're embracing that challenge. We're proud to be in the ACL."

Western Sydney have only claimed one victory in 16 matches in the 2014-15 A-League campaign and are 13 points behind sixth-placed Brisbane Roar, who occupy the last of the competition's finals berths.

But they will hope a return to Asia might inspired a late-season recovery in the A-League, while with the J.League season yet to begin, Kashima could lack match sharpness.

Western Sydney claimed 10 clean sheets in 15 ACL matches in 2014, and Popovic is likely to focus on defence again this year.

Saudi Arabia's Al Hilal will begin their campaign against Lokomotiv in Group C on Wednesday, while Al Sadd will visit Foolad of Iran.

The group stage of the 2015 ACL will begin on Tuesday with Jeonbuk Motors taking on Kashiwa Reysol, while Gamba Osaka will face Guangzhou R&F.

The V.League club have not played in the ACL since 2008.

"The [ACL] is a great opportunity for clubs to shine. The Wanderers had an unbelievable campaign last year and now they're recognised all around the world."