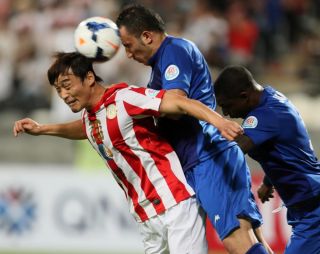 The UAE Pro-League outfit could have booked their spot in the round of 16 had they triumphed at the Mohammed Bin Zayed Stadium on Wednesday, but the Iranians had other ideas.

Mohammad Ghazi Najafabadi's goal 20 minutes from time moved Esteghlal to within three points of their hosts, who lost for the first time in a group now led by Al Shabab.

The Saudi Arabians were 2-0 winners at Al Rayyan, with Essa Al Mehyani and Hassan Muath Fallatah on the scoreseet as the Qatari outfit slumped to a third defeat in four games.

Reigning champions Guangzhou Evergrande suffered a first loss in the competition, going down 1-0 versus Jeonbuk Motors in Group G.

Melbourne Victory squandered the opportunity to move level with Jeonbuk and Guangzhou on seven points as they fell to a 3-2 defeat at Yokohama F Marinos.

The Chinese side mounted a mini recovery thanks to strikes in the closing stages from Du Wei and Han Peng, but it was not enough.

However, they remain ahead of Cerezo Osaka due to a better head-to-head record over the Japanese outfit, with the two set for a potentially decisive showdown in a fortnight.

Cerezo's situation could have been worse, but a double from Tatsuya Yamashita earned a come-from-behind 2-2 draw at Buriram United.

Elsewhere, in Group C Al Ittihad jumped to second place as a double from Abdulfattah Asiri guided the Saudi side to a 3-1 win over Qatari team Lekhwiya.