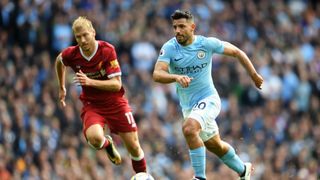 Pep Guardiola has challenged Sergio Aguero and Manchester City to banish their Anfield hoodoo when they face Liverpool on Sunday.

Undefeated Premier League leaders City head to Merseyside with a handsome 15-point advantage over Manchester United at the summit but history – along with Liverpool's own impressive run of 17 games unbeaten in all competitions – suggests they are in for a rough ride on Merseyside.

City's last win at Anfield came courtesy of a Nicolas Anelka brace in May 2003, with four draws and 10 defeats since that result, including losses on each of their past four visits.

Aguero moved to 19 goals for the season thanks to his last-gasp EFL Cup winner against Bristol City in midweek and has netted six times in 11 Premier League matches versus Liverpool but, in a reflection of City's struggles in the away fixture, each of those strikes from the club's all-time record goalscorer have come in matches at the Etihad Stadium.

"I don't believe in these kind of things but in 45 years Manchester City won twice there," Guardiola told a pre-match news conference.

"Last time was 15 years ago. It means a lot in terms of how complicated it is to play there.

"The records are there to be broken and maybe, on Sunday, Sergio will break that record."

Guardiola, who is again set to be without captain Vincent Kompany due to a calf injury, believes the weekend clash will provide another stern examination of his team's big-game pedigree, having seen them pass such tests with flying colours at Stamford Bridge, Old Trafford and Napoli's Stadio San Paolo this term.

"I you want to achieve something that is good and win titles you have to win on these kind of stages," he said.

"This season at Stamford Bridge we were able to do that, but we still have to go to Anfield and [play away] against Arsenal and Tottenham.

"We still have a lot of things to do but tomorrow is such an important game to see again if we are able to do big things in this season – in the big stages of the Champions League.

"It is a good test for us. When we arrive at the knockout stages in the big competitions, how is our behaviour?

"We did it at Stamford Bridge, we did it at Old Trafford and [at Anfield] we have to do that."

Raheem Sterling will make his latest return to the red half of Merseyside since his acrimonious £49million switch from Liverpool to City in 2015.

A hostile reception is likely to lie in wait once more for the England international, who has made tremendous strides under Guardiola and scored 18 goals in 29 matches this season.

"Normally when this kind of situation [booing] happens it is because he was important for Liverpool fans," the City boss added.

"This reaction happens because there was love for him from the fans.

"It is not the first time he goes back. I think he is more mature. Of course, he has to be calm and play the game he has to play."