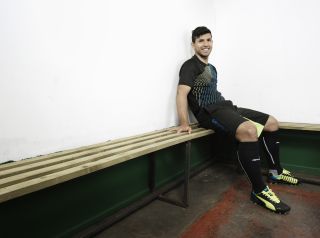 Despite starting the season with Community Shield success against Chelsea, the Etihad Stadium side laboured in their attempt to defend their Premier League title. City finished 11 points behind arch rivals Manchester United and crashed out of the Champions League at the group phase without winning a single game.

Reports of a dressing room revolt first emanated in October following a 3-1 loss to Ajax in Amsterdam, while goalkeeper Joe Hart was believed to have clashed with his manager in the aftermath of City's derby defeat to United in December.

The former Sampdoria and Lazio striker left his post a year to the day since winning the Premier League in the most dramatic of fashions; Aguero netting in the final seconds of the season to steal the silverware away from the Red Devils.

And the Argentine front-man, who opened his account for 2013/14 in City's 4-0 drubbing of Newcastle on Monday evening, has stuck up for Mancini, stating the players never had a problem with the manager.

Speaking exclusively to FourFourTwo, he said: "Whenever a team isn't at its best, the press are looking for stories to explain why.

"Mancini never had a problem with anyone and we got on well with him because he always had the club's best interests at heart.

"The club have the right to decide whether he was going to stay or not at the end of the season, but there certainly weren't any problems from us."

But Aguero believes a second successive season without significant silverware should not be deemed a 'failure'.

"Not a failure, because you can't win everything," he said. "But as players we need to find a commitment to do things well. We've made some excellent signings and have to players to do great things this year.

"We need to stop dropping points away from home, which made our lives very difficult. At home we've always been strong, you can feel that teams don't like coming to the Etihad because of the respect that we've built up on the pitch over the last couple of years.

"If we keep working hard every day in training then we can have a good season away, as well as at home. Then who knows what can happen?"